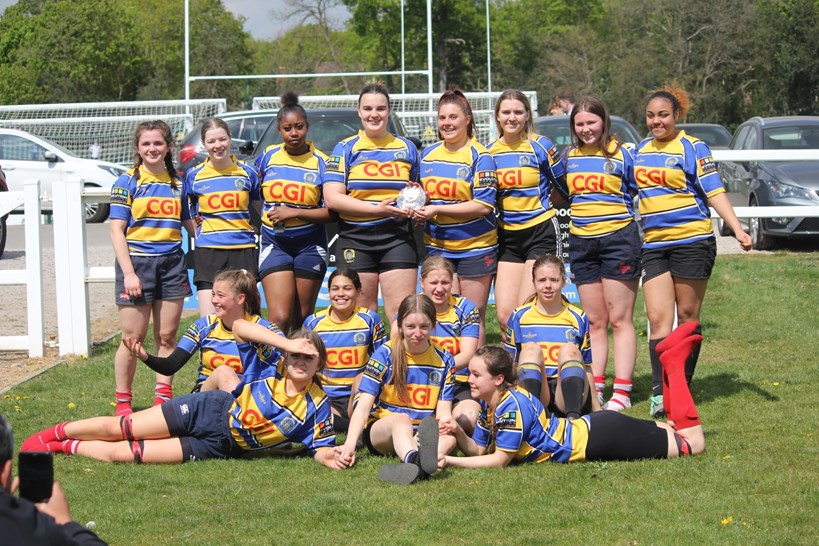 The final game of the season and it was a rematch of the first. Dorking/Old Ruts versus Chobham Round 2!

And what a game it was! Clara kicked off and the battle began. Chobham were raring to go and quickly scored. 5-0. Dorking came bounding back, winning a scrum from kick off and Lucia making a break from an 8 pick and go, who passed to Poppy who was racing up the outside before offloading to Amina who dived at the line. 5-5! No conversion.

Chobham came rushing back and despite huge tackles from Daisy, Amina and Lucia, they ran in another. 10-5. Clara kicked off the restart and with a massive chase from our girls, we turned the ball over and Chobham conceded a penalty. It was taken quickly by co-captain Roisin M but was later lost in a maul. Chobham made a break from their 22 and scored and converted. 17-5

From kick off, Dorking managed to turnover the ball after a Chobham scrum, with Rosie flattening their 9 and Lucia making a break. Dorking scrum. Lucia runs an 8 pick and go, needing several Chobham girls to take her down. The ball went to Kyrie who ran a hard line and she was suddenly back receiving the ball off fly-half Clara running hard again and making 10 meters before a beautiful offload to supporter Lucia who crashed over the line! 17-12.

Chobham back with the ball in hand and scored another under the posts. No conversion. 22-12. The fight continued and Rosie made a break from the halfway line. She continued to the 10 m line, to the 22, to the 5 and over the line. Try! Clara slotted the conversion with ease. 22-19. Chobham scored twice more with another break from Rosie separating their tries. 32-24 at half time.

Dorking received the ball from kick off with Kyrie making several meters before offloading to Roisin F who popped the ball out to Lucia who ran a try in down the wing! Clara converted. 32-31.

Chobham kick off and they pushed us back to our 5 metre line. We made a turnover and Maddie made a break, evading two tacklers before offloading to Amina in support who was pushed out. Chobham lineout.

Lucia ripped the ball from the opposition on the other wing with Chobham rucking over ferociously, turning the ball back over. One pass out and Roisin F, Daisy and Amy were waiting. Dorking ball. Rosie passes out to Clara who dodges a tackler and pops the ball to Maya who passes to Lucia who makes yet another break! She’s taken down but Maya is right there and receives a pop pass from the ground and she’s off! Diving under the posts and its 32-38.

Chobham kick off and Amy is there to receive, fighting off 3 tacklers and making it to the 22 before passing to Maddie on the outside. Unfortunately, the ball is lost in the ruck and Chobham capitalise on this and score. 37-38.

Ball back in Dorking’s hand and they make their way up the pitch. Chobham are like a brick wall in defence and with a maul from the 10 m line, Roisin M scores from the back! Clara converts. 37-45.

Dorking receives but the kick doesn’t go 10. Dorking scrum. Unfortunately, a penalty is conceded and Chobham kick for touch. Daisy wins the lineout for Dorking! Chobham concede a scrum and Lucia takes the 8 pick and go, and Maya makes a break! She’s tackled hard but Amy and Amina are in support and Amina runs in her second try! Clara converts. 42-52.

Us coaches were all too excited to notice what comes next, but Amy fights off several more defenders and suddenly Amina has the ball and she’s running down the pitch and it’s a try! It didn’t matter what came next, there were two minutes in the game, and we were up 57 to 42! Dorking had won the Plate Final!

Cheers all around for our girls who had played their best and most enjoyable game of the season and in classic Dorking spirit, had a cracking second half! Co-captains Lucia and Roisin lifted the trophy and Poppy was awarded Player of the Tournament! Clara won Player of the Match.

It was also several of our girls’ last match for U18s so was a bittersweet final with the girl’s saying goodbye to Lucia and Jolie alongside Liv and Grace who unfortunately couldn’t make it. We wish these girls good luck in the future and will welcome them to the Women’s team in the new season!

Congratulations again to our girls on a fantastic season, from playing their first game as a joint team in January to winning in April, you should all be very proud of yourselves. Thanks to Old Ruts for this season and to their coach Rob and we look forward to an even better season come September!