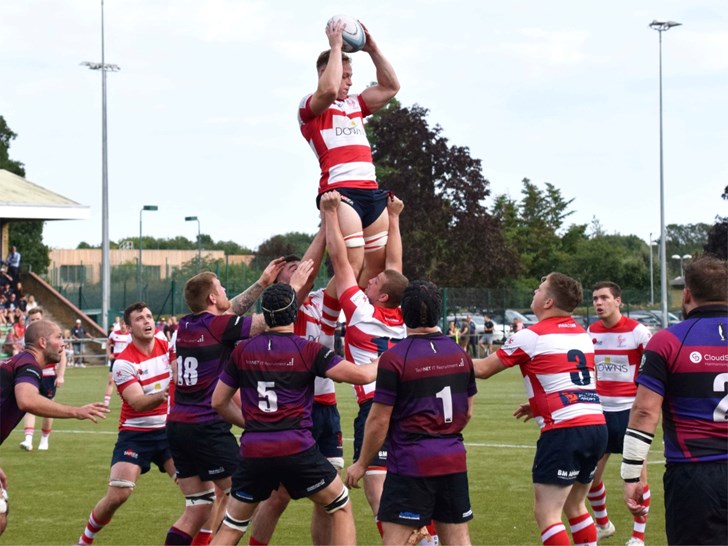 It’s only 45 minutes around the M25. Well if the M4 hadn’t been closed it would have been. Maidenhead RFC committee lunch table was very kindly held for your special corespondent and traveling companions - Nick Smith and Ted. The other Dorking guests on the table Bolton Bob (Higson) and Roger Perry.

Maidenhead’s President Dick Brown - a Rhondda man through and through (Treorchy RFC) who had played tight head under the captaincy of the great John Dawes at London Welsh - was very welcoming. A lovely man. Their Chairman ‘Boughy’ Bough together with our League Secretary Paul Astbury and the Berkshire RFU great and good made up the table.

Maidenhead have fantastic facilities with a modern covered stand attached to the clubhouse that overlooks a 3g pitch. The club’s ethos very much in tune with our own. It hadn’t been the best of starts for them with two losses but I observed that we’d had mixed results on plastic having been witness to our squandering of a 30 point advantage at Bedford a couple of season’s ago.

Maidenhead had some big boys - but obviously not gym bunnies. Our scrum suffered initially which was a little bit surprising given our prowess in that department. An early penalty for a collapsed scrum and 3-0. Two penalties advanced 10 meters by a ‘new to this league’ referee should have been a wake-up call as to our discipline.

Initial confrontation saw the Maidenhead side bishbosh with the big boys linking, quite worryingly at times, with some lively backs. One felt that Dorking had it in them but we were looking a little unsettled. Nerves were eventually settled by Toby Mcrae bouncing off three tackles to score in the left corner. Matty converted. We were now starting to play with some vim and vigour, with lovely breaks and neat off-loads. Joel snaffled a loose ball and grubbed through to score under the posts. Matty on target. Time for the right hand side of the pitch to host the play and the two Frasers to work their magic - Macdonald to break followed by a snorter of a grubber for Mosely to score right hand corner. Nobles missed.

Further pressure and a penalty in front of the posts for a 3 pointer to keep the score ticking over.

Niggles were evident at this juncture - not the injury kind - but more associated with personalities.

Maidenheads 8 and our Tom Bristow both yellow-carded for a disagreement off the ball with the 8 slapping his own forehead as if he’d forgotten he’d left the engine in his car running and then falling to the floor.

Maidenhead were not out of this fixture by any means at and some sustained pressure and a beauty of a cross-field kick allowed a fumbled clearance to be pounced on and an unconverted score ended the first stanza with the scoreline 8 - 22.

Second half saw the Maidenhead side up a gear and some nice interplay and another precision cross field kick saw them take a clean collection and score left corner. The conversion was missed. With only 10 points in it Maidenhead had their tails up. They really did have some big ball carriers - the 4 in particular was very hard to put down and was deceptively agile with excellent handling skills.

The ship needed to be steadied. Thank you Cam Cowell. Stupendous solo effort down the right wing, beating several players to round the last man and score for Matty to convert. And. Now. Breathe.

More interplay and Darragh slipped to big Finn who scored under the posts. Matt converted. Then our final score saw Ryan Jeffry power through two of their front row at close range to touch down and Matt converted.

Maidenhead did not - ever - roll over and they manfully kept the pressure on and, after more niggles Darragh was yellow cared for a retaliation. Sustained pressure saw Maidenhead end the game in the 11th minute of injury time with a close quarter drive over the line. This was converted to make the final score 20 - 43.

Final thoughts - delighted to watch some very, very fine rugby but we must be more disciplined.

Jimmy Catton put it well when he said that the feeling in the post match huddle was that they felt as though they had lost - such is this teams’ search of perfection. Can’t wait for Hertford on Saturday.