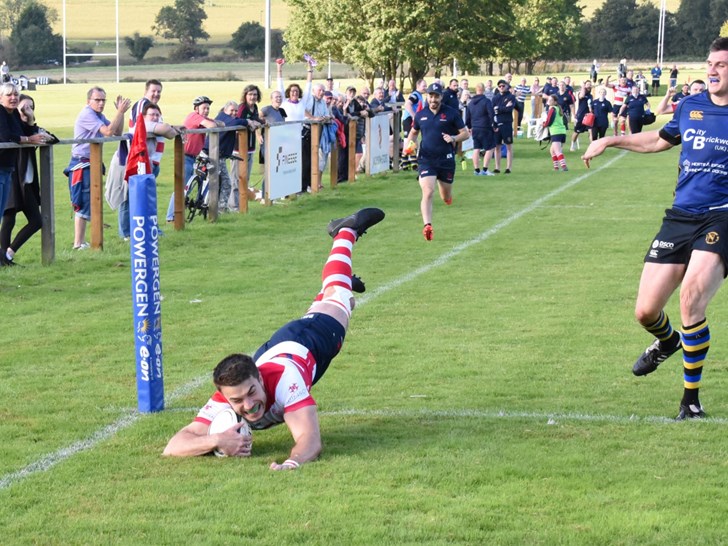 A good day on Saturday. The weather was clear and with only a light breeze with and the form books showing both sides unbeaten so far this term, it was set up nicely for Dorking to host old rivals and friends from Hertford RFC. The pitch remains in great condition, which allowed for both sides to enthusiastically kick and chase and then run the ball when field position had been gained in the opposition’s half.

Dorking played up the hill in the first half and were showing only one change from the visit to Maidenhead with Jasper King recovered from illness to take the No5 shirt.

Hertford drew first blood after 6 mins when a scrum penalty was neatly kicked 0-3. This was followed by a converted try from the visitors 7 mins later after an impressive sweeping move down the wing where there was a distinct lack of Dorking defenders 0-10. This was an ominous first 15mins as Hertford are always a difficult side to score against and Dorking needed to hit back quickly, which they duly did 3 mins later with a successful conversion by Captain Matt from an offside penalty 3-10.

Dorking seemed to have been jolted into action and spent some significant time in the Hertford half who were caught offside, and Matt stepped up to slot it over 6-10. This was followed 8 mins later by another penalty to Dorking which reflected the pressure Hertford were now being put under, 9-10. Half time.

A good half but the home spectators really wanted to see the pressure turned into tries.

Dorking reappeared for the 2nd half and began with a bang. A series of pick and go drives from the well drilled Dorking pack ended up with Jasper King driving over under the postswhich gave Matt an easy conversion, 16-10.

With Dorking still pressuring, Hertford showed real resilience in repelling multiple attacks and the stalemate was only broken 10 mins later with another Noble penalty 19-10.

Territorial advantaged was maintained by the home side and from a dominant scrum the red & whites got a good shove onand the ball was moved quickly out to the wing for the impressive Toby McCrae to score out wide. Matt coolly converted; 26-10 and Dorking now looked to put the match out of reach and hopefully secure a bonus point. 5 minutes later and the decisive score was made out wide after some neat interchanges between backs and forwards - even more pleasing was it was scored by Ollie Rathbone who was making a return after a long layoff with injury. Matt couldn’t convert but with the score now at 31-10, it looked like a good day’s work was nearly done.

Think again - Hertford are never a side to lie down and a foray into the Dorking half resulted in a well taken try, as a bobbling ball was gathered and dotted down for a converted try, 31-17.

This seem to stimulate Dorking into one last push for the allimportant bonus point and a speculative kick from the visitors was gathered and immediately run back. With gaps opening up the ever creative Cam Cowell was fed the ball and heneatly danced around a few defenders to score in the corner - conversion missed leaving the score at 36-17.

This was how it ended a few mins later and meant that Dorking had taken the 5 points on offer. Overall a pleasing performance which leaves Dorking at the top end of the table even though the circumstances surrounding the Tring match are still under investigation. There is a sense that there is plenty more to come from this exciting team and thoughts now turn to next week’s trip to Westcombe Park, which is never an easy place to visit.

“Overall pleased with the result today but we know we left a fair few points out there and against better teams, the result might not always be favourable. We adjusted well to the conditions in the second half, and our support play was simply excellent. This is a special group of players, and we just need to stay grounded and stick to our systems one week at a time”