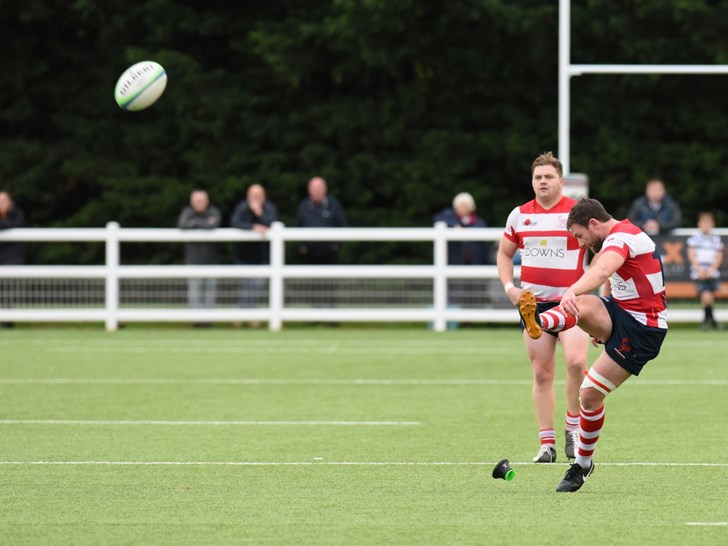 It was good to make a visit back to the South Coast to re-establish links with Havant Rugby Club. Things have changed a bit since DRFC’s last visit, with a very impressive ‘365’ artificial grass pitch now installed but, as always, a visit to Bob's bar in the depths of the clubhouse was a must! The visiting lunchers from Dorking gave a solid thumbs up to the Hampshire welcome they received and the quality of food on offer (note to Dorking’s caterers, lamb shanks is a winner!). The players then delivered their own veritable feast of rugby, which went down to the very last play of the game and significantly increased the heart rate of the large crowd.

The Dorking bus resembled an advert for cold cure remedies, but this hid a steely determination to keep the momentum going on what has been a good start to the season.

From the kick-off, Dorking delivered a superb demonstration of rugby as Havant struggled to cope with the big runners, and the speed and penetration of the backs.

After 7mins, Dorking attacked off 1st phase and good yards from Joel Grant and Finn Osborne provided quick ball for a nice runaround move which drew in the home defenders,and Cam Cowell delivered a trade mark long pass to Ollie Rathbone who showed real gas to score in the corner. A difficult conversion into the wind was missed, 0-5.

Dorking received the restart and immediately attacked up the middle, with first Finn Osborne, then Fred Dalton, who fed the charging Jasper King, who was eventually held up short, but the ball came back quickly and was fed to Ryan Jeffrey, who scored an unconverted try, 0-10 with 10mins gone.

Havant now got going with some good attacking play, but the Dorking defence held firm and forced errors. Dorking attacked again and still looked dangerous, and it looked as though enough space had been created down the wing for Ollie Rathbone to score, but the last pass agonisingly went just behind him.

After 17 mins, Dorking were pressuring again, and Toby Macrae had a good run to the line and looked to have scored in the corner, but the touch flag went up. A difficult moment, as we all value the volunteers who help make matches happen, but it can't be right to put a young guy finding his way in rugby in such a position of responsibilities.

As always, our travelling photographer captured the moment brilliantly and I am sure we can arrange a copy for the wall in Bob's bar!!

On 30 mins, the breakdown began getting fractious and a scuffle led to a Havant player joining the subs bench for 10 mins. Dorking kicked the ensuing penalty to the corner and a well-rehearsed short line out saw a throw to the back being cleanly caught and immediately passed off the top to Fred Dalton on the charge through the gap in the middle of the line outto crash over for the try. Matt Noble was on target with the conversion, leaving the score 0-17.

What a start, but the yellow card seemed to invigorate Havant and they finished the half strongly.

First, they executed their own line out move with a short throw to the front and neat pass back to the impressive No2, who scored out wide; conversion missed, 5-17. Secondly, another well executed move off 1st phase scrum ball saw the blind side winger take a pop pass in the centre to beat the Dorking defence and score a converted try under the posts. 12-17, which is how the score remained at half time. Very much game on!!

Toby took a bump in first half and was replaced by Fraser Mosley. Dorking restarted the match, but disaster immediately struck. Fred Dalton played the man in the air and was yellow carded. Havant tails were now firmly up! Despite the pressure, Dorking held firm and got the ball into the Havant half and won a penalty. Captain Matt lined up a shot at goal and it agonisingly skimmed the outside of the post and went wide.

The 14 men of Dorking managed to prevent another score from the opposition, but it was all Havant for the next 25 mins, and they finally made the pressure count with a well taken converted try to take the lead for the first time in the match, 19-17.

Dorking were simply making too many errors, having cleared the lines they gave away a penalty on the half-way and an optimistic penalty shot at goal into the breeze fell short, but was knocked on by Dorking and pressure was immediately back on. Dorking defence dug deep again, and Havant were repelled. At the next scrum, a Havant put in was taken against the head (a rare sight these days in rugby), and from the unexpected attacking possession, Dorking won a penalty in front of the posts, which Matt duly slotted from 45 meters to regain the lead 19-20.

39 minutes had now elapsed but, most importantly, how long would the man in the middlehave left on his watch?!

Immediately, Havant came roaring back and had their own penalty shot at goal, from a long way out, but it was missed. 40 mins had now elapsed.

Havant attacked again and were awarded a penalty out wide. They kicked to the corner for an attacking line out – 46 minutes gone!

From the attack the referee, who was unfortunately unsighted, missed a Havant knock on and assumed Dorking had played the ball on the ground. Penalty to Havant in a relatively straight forward position for a shot at goal; 48 mins elapsed.

The kick was lined up but to the dismay of the home support it drifted wide, and the ref blew for full time. Dorking took the spoils 19-20.

As they say, pick the bones out of that!

‘It was not the performance we were after, but the result is the only one that counts. We made some uncharacteristic errors on the day, and credit must go to Havant for applying pressure & capitalising on momentum when they finally got it. Overall, it’s one of those days, where we squandered 5 try scoring opportunities, scored a bonus point try that was not awarded, due to a very young touch judge succumbing to the home crowd pressure, and having a few other decisions not going for us on the day. Player safety definitely one to review from the referee. But, all that said, he handled a tough game well. Credit to the players who battled hard and put a lot of effort into the game to ensure we stayed in contention, Captain Matt Noble for kicking the match winning penalty, and then,when we had our backs against the wall, defending like possessed players to keep them out in the last 5 minutes. It's a game we will learn from, and we now move our focus to Sidcup, who are always a tough challenge.''

Back to the Big Field this weekend when we host Sidcup. A sell out lunch will set things up nicely for a 3pm kick off.