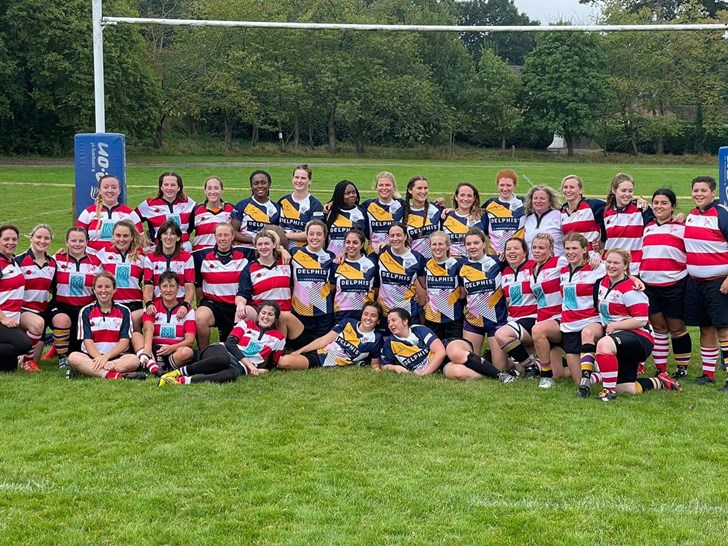 By Pip and Tasha Merrett

Having teamed up with established Women’s team Old Cats to boost numbers, develop squads and get game time, our first Inner Warrior Development league match was postponed when the opposition were unfortunately unable to field a team. With pitch, referee and post-match facilities already organised, we took up the opportunity of a friendly with Earlsfield-based Bec’s Belles.

The Dorking Old Cats team had never played together before and many players met for the first time in the changing room. Several had to play out of their usual position to accommodate others and they had to calm the nerves of several women playing their first ever game of contact; Lauren Parson, Lydia Maskery, Hayley Murphy, Pip Merrett, Leah Garel & Jacqui Ide. Bec’s Belles on the other hand were clearly a well-established team, short on numbers with only 14 players but all relatively experienced, young and fit!

Bec’s Belles kicked off, immediately playing at an intensity that caught us off guard and it became clear that we were in for a tough time.  With the help of the more experienced players, Dorking Old Cats Captain, Pam Davies steadied the troops and although the Belles broke through on many occasions, we gradually made it harder for them to do so.

Huge tackles were put in by Pam, Jas Pitt-Payne, Spencer Seales and Lynn Tickner in the early stages to give Dorking Old Cats some heart and we got some time on the ball; Sian Adams, Georgina (G) Almond and Lynn all made some good runs and Hannah Bennett stepped out of three tackles and handed off a fourth before off-loading the ball. Unfortunately, Sian sustained a serious knee injury in a tackle and wasreplaced by Katie Corbett. Hayley Murphy also came on in place of Tash Merrett at full back.

As half time approached, Amber Miller, having recently moved up from U18s into her first Women’s match, made her presence felt, putting in some hefty try-saving tackles and forcing a turnover. Lily Philips also started making a nuisance of herself, tackling ferociously, forcing a turnoverand making a number of line-breaks.

Scrum half Barbara Wagstaff went off with a hand injury with Lydia taking her place and instantly receiving a hefty tackle. Hayley scooped up a loose ball and good ground was made due to the efforts of G and Lynn. A shift around of players took place; Katie taking over from Jas at flank, Tamzin Kerslake coming on at centre with Pip taking over scrum half duties and Lydia replacing Hayley at full back. Despite some strong runs and tackles, play continued to go Belles way and at the half time break the score was 0 – 34.

The second half saw Tash, Tamzin and Katie taking turns to don a Belles’ shirt to replace their injured players. Dorking Old Cats kicked off, Lucie Warren immediately won a turnover and Lauren Parsons made a break down the wing – only to be stopped by Tash!

A lack of game time, join training and general inexperience caused mistakes however and Belles were quick to pounce and turn the game to their advantage. Their tries were not easy ones however, with Becky Barker, Lauren, Pam, and Tamzin all defending well and with Lily and Hannah wiping out those that came within their reach. Jacqui “I don’t know the rules and am just here to watch” was persuaded onto the pitch to play out the last 10 minutes and the final try of the day was scored by one of our own Katie. Unfortunately, she had the wrong shirt on at the time!

So while the final score was a fairly comprehensive 0 – 58 defeat, the day was won by the spirit in the Dorking Old Cats camp. A squad made up on the day of 24 players who barely knew each other, either hadn’t played contact for months or had never actually played at all, ended the day as a tightly-knit team. Old Cats stalwarts welcomed and supported new Dorking players and the more novice Old Cats combined well with our ex-Dorking Girls who are now able to play in their Club colours again. It fair brought a tear to the eye – and even Lynn got a bit emotional!

So onwards and upwards. We’re looking forward to our next league match v Dartfordians on the 3rd October and to more friendly fixtures.