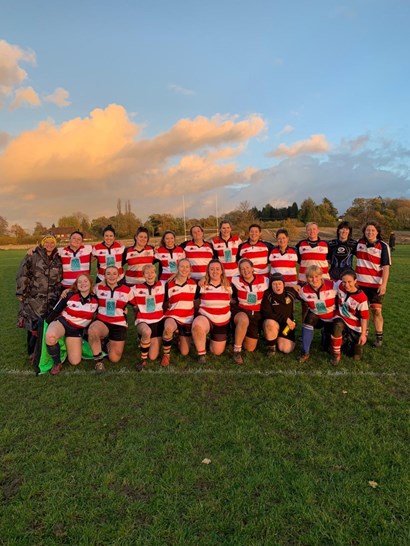 This weekend was the much anticipated first home match of the season for the Corks squad in which they welcomed a Streatham & Croydon development team. Corks boasted a full squad with 23 players available for match which is testament to the player’s commitment.

It was clear from the outset that this would be a tough challenge for the team as S&C started the match strong, displaying continuity and solid structure in attack. They were building phases in attack but Corks remained resolute in defence and denied S&C the chance to make any ground. Every single player should be immensely proud of their defensive efforts as they made thumping tackles across the whole defensive line. The efforts were rewarded as Corks turned the ball over and swiftly moved it out wide through some excellent passing from the backs leading to Jemma Wood finding space and galloping clear to score the first try of the match which was reliably converted by Stevie Cook.

This was to be the theme of the match as S&C continued to enjoy the lion’s share of possession throughout the match with Corks refusing to allow them to make easy progress up the pitch. In what was a similar move as the first try, Corks showed great hands to move the ball to space again after a turnover to put Jemma into space once again to saunter down the pitch for the second try which was again converted by Stevie.

The defensive effort throughout the half started to take its toll as a succession of high tackles led to a team warning and then the referee losing his patience and sending Stevie to the bin for 10 minutes. Corks continued to defend heroically but S&C finally managed to make the numbers count and scored a try meaning that the score was 14-5 to Corks at half time.

With 6 minutes left of the sin bin S&C continued to pile on the pressure as the second half started and despite continuing to produce some crunching tackles, Corks couldn’t hold out and S&C brought themselves back within 2 points.

With Stevie back on the pitch Corks were able to enjoy some possession midway through the second half and patiently worked their way up the pitch with strong carries from the forwards and nifty breaks from the backs. This lead to Lucia Schifano powering over for Corks 3rd try of the match taking the score to 19-12.

S&C come fighting back but were, yet again, met by some outstanding tackles and defiance that Gandalf would have been proud of. Unfortunately, the line was breached after the S&C managed to cut a line and find some space to score under the posts which meant the score was 19-19 with less than 10 minutes to play.

Both teams kept playing till the end try to find the decisive break but in the end the two teams could not be separated and the match finished 19-19. This match was a true advert for the sport and did not lack in pace, power and guile. Well done to both teams for what were two fantastic performances. Corks produced a defensive performance for the ages and the whole squad should be exceptionally proud of their efforts.

An extra shout out Kate Harvey as forward of the match for her out of this world work rate around the pitch, Dara Wilson as back of the match for her ability to chop potential attacks down and move the ball into space to set up attacks and to Steph Le Hur as most improved after producing 70 minutes of outstanding rugby after 3 years out of the game having twins, and finally to Caroline Court who produced 80 minutes of fantastic rugby after not playing a competitive match of contact rugby since 2005!