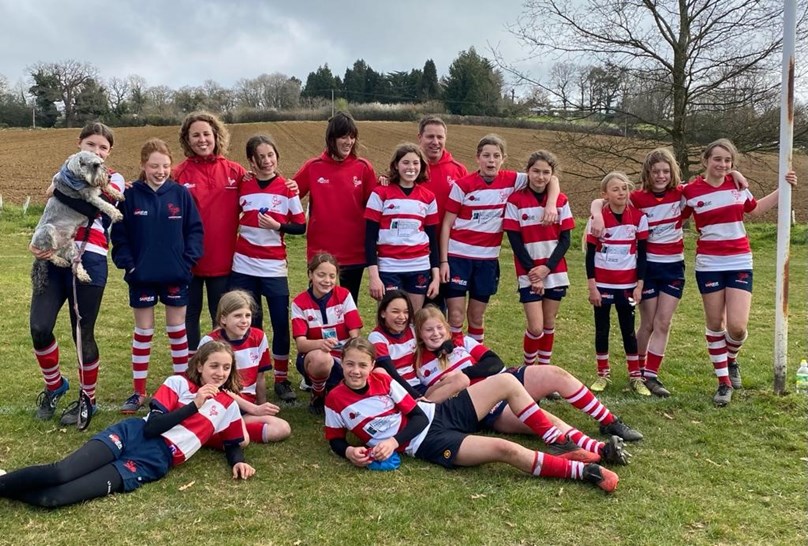 Mother’s Day saw the Dorking U13 girls host Old Reigatians in the final pool round of the Waterfall Cup.  Conscious that OR had a large squad with many older players to select from, but fresh from last week’s win away at Cobham, the girls were calm and committed during the warm-up and went into the game with their heads up.

The first few minutes are always a dangerous time for us as we can be a bit slow to get going, and sure enough, one of the taller and faster OR girls darted through to score.  If they thought that was going to be the way the whole game was going to be played however, they were very wrong.  Instead of being shell-shocked and hesitant as they were at the start of the season, the Dorking girls took it as a personal affront and noticeably upped their game.

Crashing runs from the likes of Sophie, Zoe, Amalie and Millie gained us considerable ground and a few minutes later we had worked the ball up the pitch for Zoe to score in the corner.  Tit for tat, and it was OR’s turn to look a bit startled.   And so, the battle commenced….

Opting to receive at the re-start OR found themselves facing a stampede of Dorking players and their attempts to attack were repeatedly halted.  Much improved line speed, particularly from Florence, Lili, Amelia and Ella, put considerable pressure on them and each time they fumbled the ball, the Dorking girls competed for it. Strong tackling from all the girls, not just Livvy, Amalie, Zoe and Sophie but also the likes of Evie, Amelia and Scarlett, kept them at bay for some considerable time, until a couple of their taller and stronger players eventually managed to bully their way over the line.  The Dorking contingent fought back however, determinedly pushing up the pitch by either offloading the ball or taking the contact. Lili, Willow, Millie, Sophie and Amalie all competed strongly in the rucks until Phoebe managed to power her way through the opposition and score.  2 all at half time.

Encouraged and impressed by the commitment of the whole Dorking squad, we went into the second half with determination.  Again, the play was fast and furious with good runs being made and hard tackles put in.  The taller and more experienced OR girls began to make use of their height advantage, holding up our players when they went into contact (literally – their feet were off the ground!) and either wrapping them up to win a penalty or ripping the ball.  The turnovers from the mauls were quickly capitalised on and they got the ball to their stronger runners and scored several more tries.

The Dorking team learned from the experience however and decided to have a go themselves.  Without the height advantage they were unable to match OR’s mauling skills, but they repeatedly halted their attacks and twice slowed the opposition down sufficiently for Zoe to rip the ball and storm off down the pitch to score.

With it all to play for, the Dorking girls threw themselves into the fray.  Darting runs from Florence, Amelia, Siena, Poppy & Evie.  Dodging runs with fancy footwork from Livvy and Ella. Powerful surges from Sophie, Willow, Millie and Zoe and strong arcing runs from Amalie, Phoebe and Scarlett.  Scattering OR’s defence, they worked their way up the pitch and close to the try line on numerous occasions but were denied each time by foul play, including a particularly dangerous high tackle on Scarlett as she was about to score.  Although we were awarded penalties each time, the pause in play allowed OR to organise their defence and get their stronger players in position and despite our best efforts, we just couldn’t get over the line.

So, the final score, 4 – 7 to ORs but that did not reflect the nature of the game.  The two teams were very evenly matched, and every passage of play was closely fought.  The Dorking girls put in their best performance of the season, showing great tenacity and skill, with a huge improvement in the key areas of line speed, rucking and tackling.  They worked together as a team, with each and every one of them putting in huge efforts, and their determination, courage and commitment are to be applauded.  They left the field with their heads held high, knowing they had played a great game and made their coaches and parents proud.