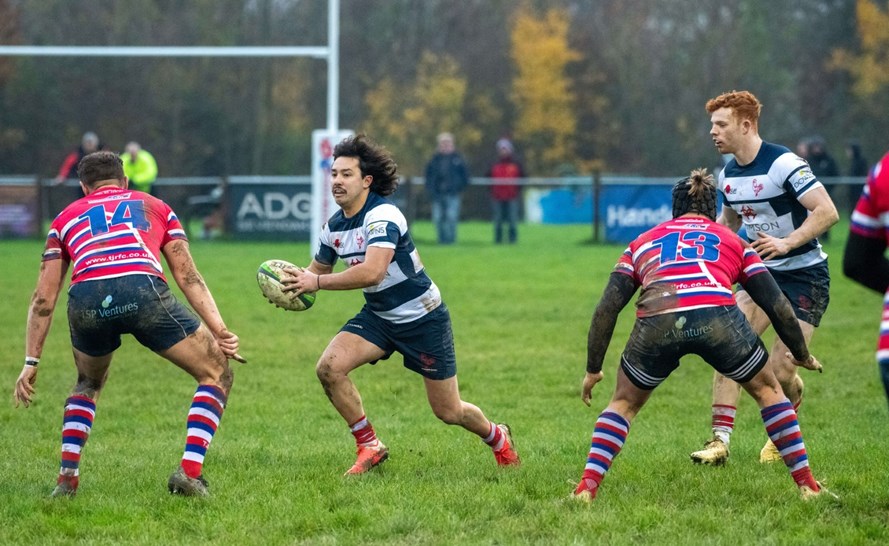 Dorking Slip Up At The Slade

Two late tries sealed victory for Tonbridge Juddians at the Slade as the Red & Whites let slip a 12 point half time lead. Having gone two tries up in the first 10 minutes, Dorking were unable to trouble the scoreboard further until the second half, and indeed were often under pressure from a determined TJ side that, but for forced and unforced handling errors could have been ahead by half time.

Dorking kicked off on a pitch that was under water at the start of the week, so credit to the groundsman for getting the game on. This did however mean that players from both teams found the going ‘soft’, which contributed to the game becoming something of a midfield tussle at times. The phrase ‘one for the purists’ was heard on more than one occasion.

TJ’s backs looked dangerous with the ball in hand, but they were the architect of Dorking’s first try as a telegraphed pass was intercepted by lock Will Scholes who had an unopposed 50 metre sprint to touch down under the posts with barely 5 minutes on the clock. An easy conversion for 12 Henry Anscombe made it 0-7. Receiving the kick off, Dorking’s backs moved the ball down the line catching the defence napping and creating a gap that allowed  Henry Anscombe to touch down to the left of the posts. With Henry unable to make the conversion in the slippery conditions, the score remained 0-12.

The game then settled into something of a pattern as the two sides strove to play attacking rugby thwarted by both stout defence and handling errors; Dorking more often opting for the forward pick and drive and backs moves, with TJ’s kicking for position, lineout, and the driving maul. Honours remained even for the remainder of the half, with neither side attaining superiority in set piece or the loose, although TJ’s did squander a number of good attacking positions with slack passing and knock ons. Special mention in dispatches though to Dorking scrum half George Jackson for his dummy box kick and subsequent break from the base of the ruck as the TJ’s 5 went for the charge down.

The second half began with a period of sustained TJ pressure; a number of rolling mauls which Dorking found hard to stop legally, resulting in a yellow card for prop Henry Birch. With the Dorking forwards down a man and having a reshuffle, TJ’s upped the intensity and play remained within the Dorking half for the 10 minutes of the yellow card period. Despite this, TJ’s were unable to broach the Dorking defences, but as parity in numbers was restored TJ’s had a scrum on the 5m line. A good quick heel and the ball was spun left for wing Jack Lucas to take at speed, beating the defence to touch down for a converted try. 7-12. Dorking were quick to respond, and from an attacking line out 10 metres from the try line set up their own rolling maul. After a succession of strongly defended pick and drives, prop Tommy Powell burrowed over for their third try, converted taking the score to 7-19.

The final 15 minutes of the match belonged to TJ’s as their back line began to function without the miss passes and dropped balls of the first half, with centre James Newey crossing the line near the posts for a converted try taking the score to 14-19.

A 73rd minute yellow card for Henry Anscombe for a high tackle saw the Red & Whites reduced to 14 for the remainder of the game; the Dorking defence held firm for 5 minutes but were always on the back foot until TJ’s winger Hugo Watson won the foot race following a neat chip through. With the conversion missed it was 19 apiece and 2 minutes to play. A miss-cued restart kick did not quite go the required 10 metres, and from the resulting scrum the TJ’s 10 Thomas White lofted the ball to the right hand corner over the oncoming Dorking defence for wing Jack Lucas to field and run in for his second of the afternoon. The conversion from out wide was good. Game over, as Sir blew for the end of the game. TJ’s 26 – 19 Dorking.

“The result is probably a fair one, as we had the opportunity to close the game out, but really struggled keeping on top of a few areas.

Credit to TJ’s for applying some good pressure and making sure they grind it out.

I do feel that the yellow cards was really harsh, in a game where the penalty count was very even, but we do have to take responsibility for putting ourselves in that position.

I am still proud of this squad, and the fact that we put ourselves 7-19 in the lead shows we can easily mix it with the top teams”