A tight game played in wet and blustery conditions saw Dorking run out 17- 13 winners with a fine try well into the dying embers of stoppage time by winger Toby Mcrae. With both sides committed to playing expansive attacking rugby the crowd were treated to a match where errors abounded, but where the skills on display continually defied the conditions; a credit to both sets of players.

Earlier in the season at Barn Elms, Dorking stole the game in the final move having been 20-7 down at half time so it was particularly pleasing for the home crowd to do ‘the double’.

Barnes were on the score sheet first with a try 10 minutes into the game from wing forward Angus Farquhar following an elusive break by scrum half Josh Davis. The slippery and blustery conditions made place kicking something of a lottery, and full back George Makepeace-Cubbitt duly missed his first conversion. Dorking came straight back as flanker Will Scholes charged down Davis’ box kick following the re start to collect the kind bounce and score an unconverted try wide out left making it 5-5. In the conditions it was no surprise to see Cam Cowell’s conversion fail to hit the mark.

A period of sustained Barnes pressure yielded no points as Dorking’s defence, led by Captain Fred Dalton held firm, and lifting the siege, Dorking were next on the score sheet with a try from tight head James Catton, again unconverted, the ball bouncing agonisingly off both the upright and the crossbar. 10-5. Continuing the pressure, Dorking were unlucky not to score a third as the ball bobbled loose in the wind with a 2 man overlap. Barnes finished the half the stronger with a try out wide from winger Will Lewin on the stroke of half time, again unconverted making it 10 all at the break. 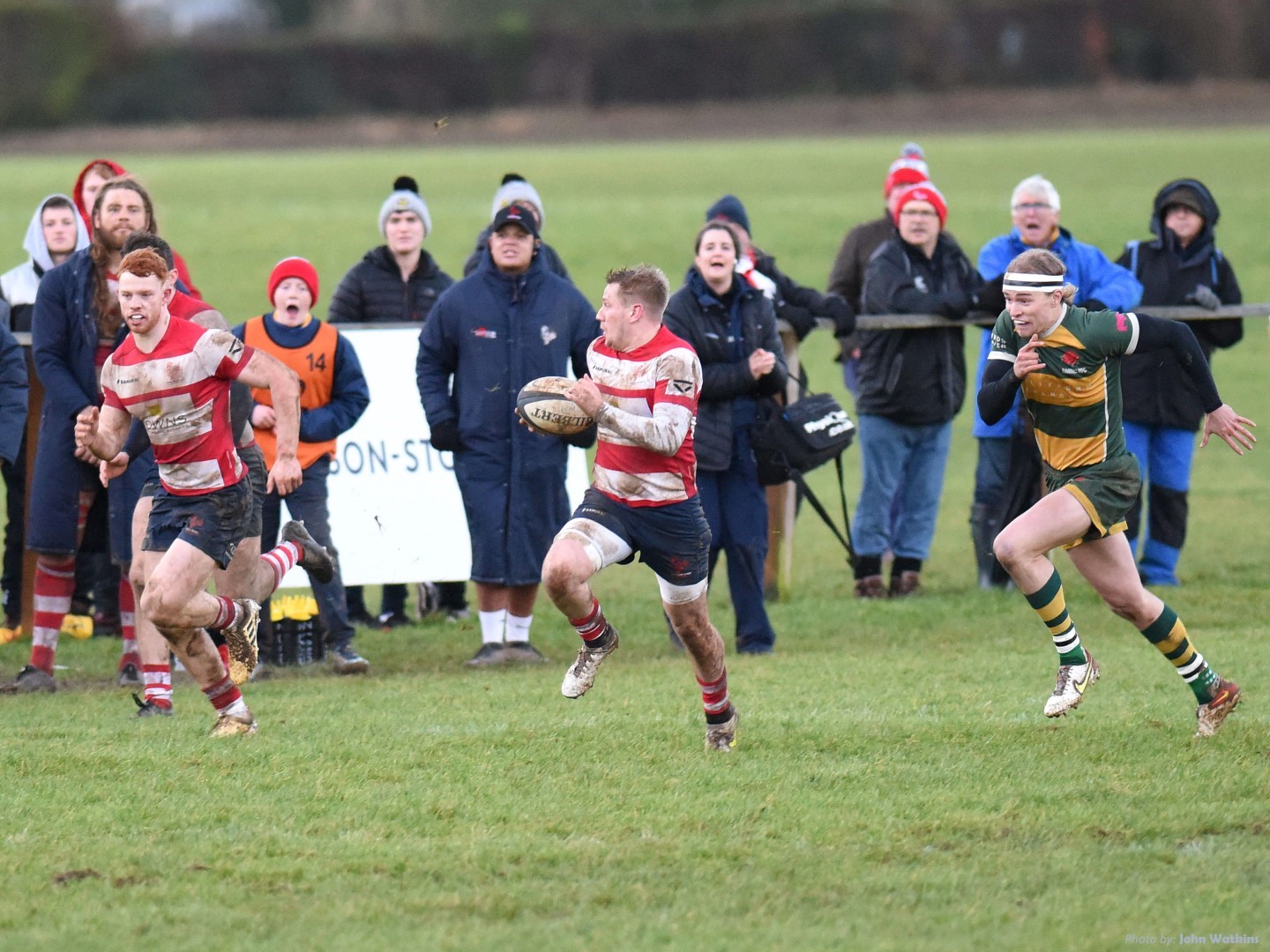 The second half remained scoreless until the 74th minute, although not without its moments as both sides pressed for advantage. Neither side really gained superiority in the set piece scrum and with the gusting wind the lineout was always something of a lottery. In the loose it was also even-steven with top drawer defence from both teams. Barnes looked to have the upper hand when Dorking were awarded a yellow card early in the half, however in spite of the man advantage they failed to add to their tally until following a series of Barnes pick and drives, Makepeace-Cubbitt slotted a penalty awarded for a Dorking offside under the posts. 10- 13.

With a second yellow for this offence, that looked like the match decided, but not to be outdone a 14 man Dorking redoubled their efforts and as the clock went into the red Barnes cleared their lines with a kick up field rather than to touch. Dorking’s flanker Scholes fielded the ball and after the forwards had taken the ball on through several ruck phases the ball was slipped out to winger Mcrae on the half way line. Beasting his opposite number and outrunning two chasing defenders he touched down just to the right of the posts, and in the final act of the match, scrum half George Jackson stepped up and slotted the conversion for the extras. As Sir blew for time, it was once again jubilation for Dorking, heartbreak for Barnes. 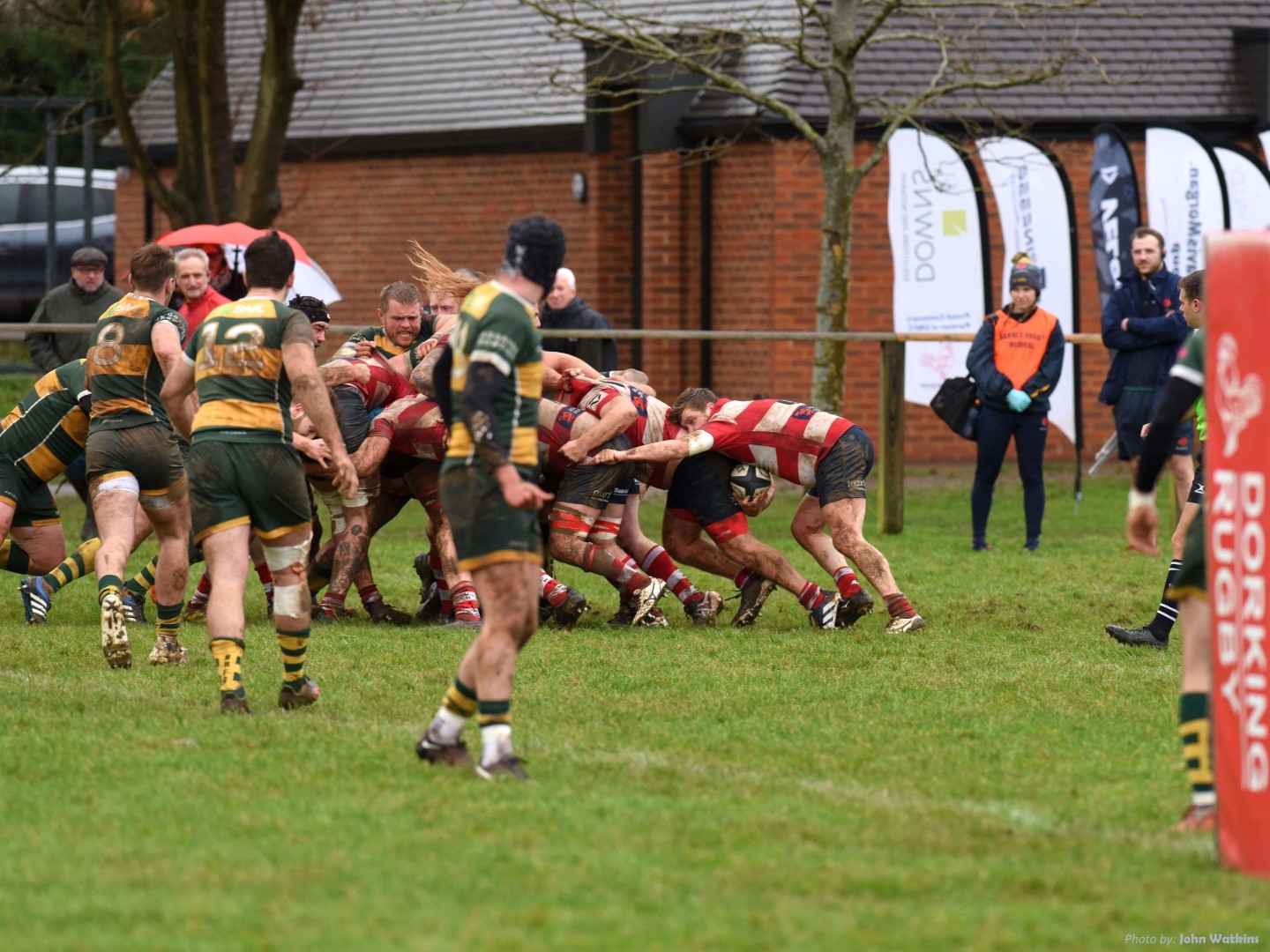 ‘On a day where we didn’t play too well and the conditions were a challenge it was great to get the win and shows the character, heart and resilience of this team.

Barnes played some cracking rugby, but it came down who could stick to their structure the most and of course make the least amount of errors.

Amazing to do the double over Barnes this year, as I do respect them and it is a great measure of how far we have developed as a team. Even when things are not going our way and we when we are under pressure, we seem to always stay in contention.

Very proud of this bunch of senior payers at Dorking and credit to the squad as a whole.’ 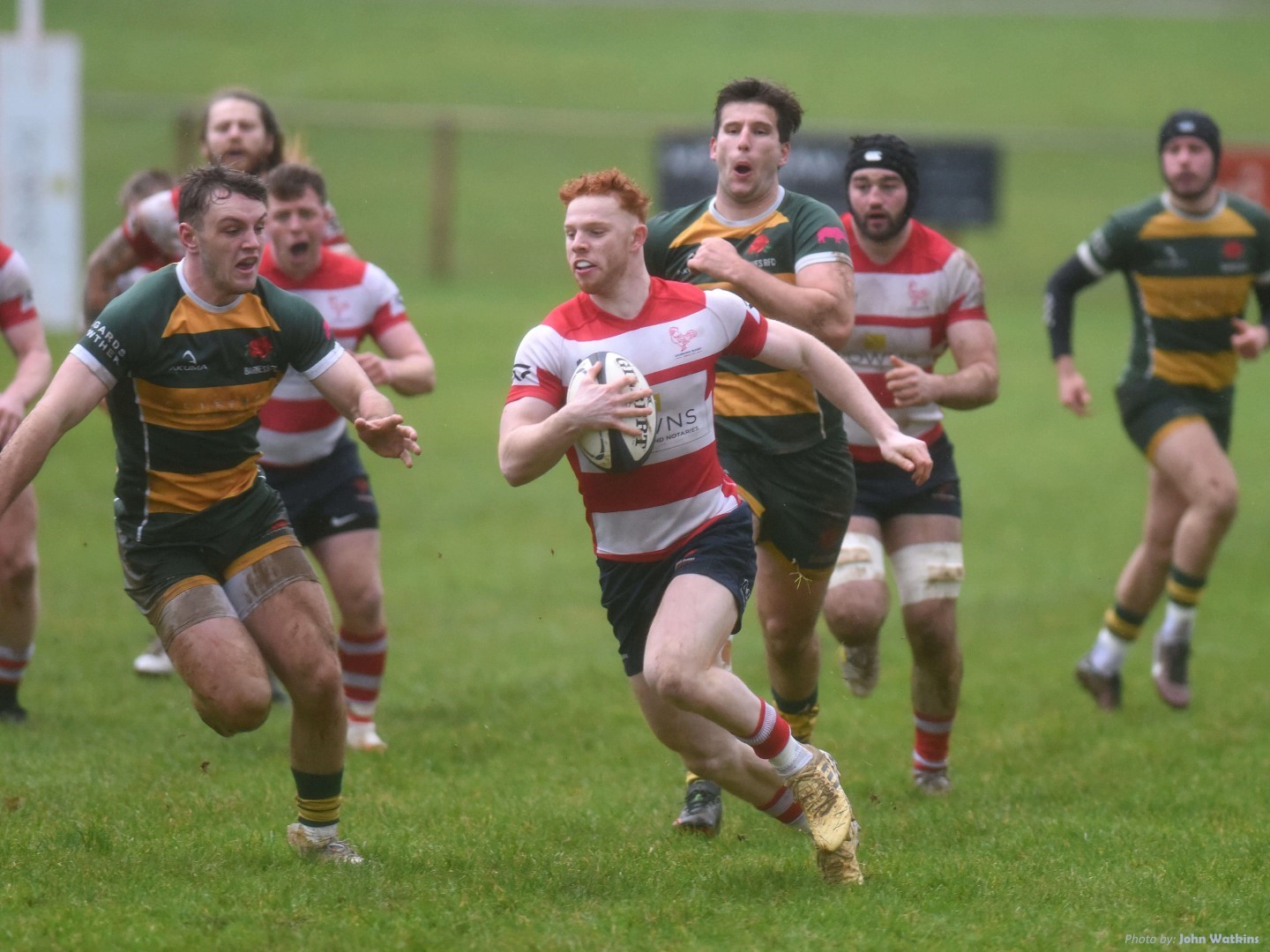