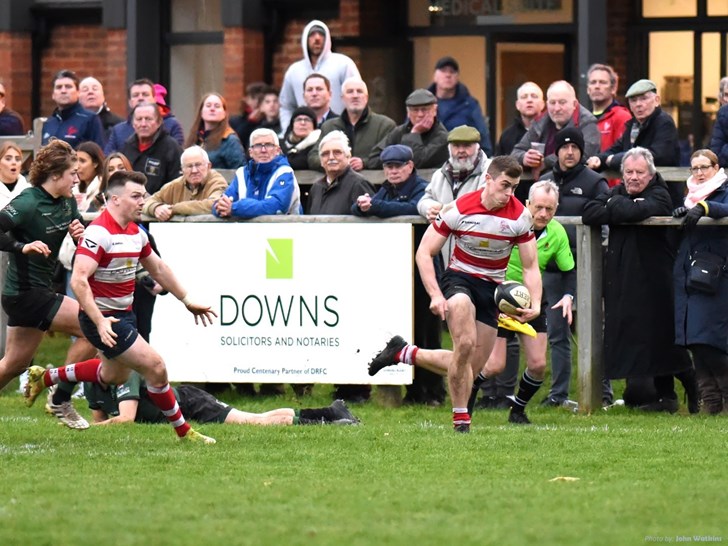 Over the years Dorking v North Walsham matches have been close run affairs with the honours pretty much even and barely a few points separating the sides. In the most recent encounter last season up in North Norfolk, the Vikings ran out winners by one point scored in the final move of the game to dash the Red & Whites’ hopes of topping the league. Over lunch the talk was, despite the 10 team gap between the teams in the league, of the prospect of another tight game.

Six first half tries, a brace by Austin Emens and one each for Johnny Ellis, Fraser Mosley, Joel Grant and Henry Birch put paid to this and sealed the match in Dorking’s favour as they ran out comfortable winners. With Henry Anscombe on target with five out of six conversions, a subdued North Walsham had no answer to Dorking’s forward power in both the loose and the set piece, setting up perfect conditions for the Dorking backs to run the ball at will. By the half time whistle the Red & Whites were sitting on a comfortable 40-0 lead.

Dorking were off to a good start playing uphill as slick hands between Andrew Ramsden, Cam Cowell and Austin Emens resulted in a try with barely four minutes of play on the clock, followed by a second some seven minutes later. With both converted, the score stood at 14-0, and not to be outdone by the backs, the forwards added a third as the returning Jonny Ellis touched down following a catch and drive from a five metre line out. The conversion was good and it was 21-0 with barely a quarter of an hour played. Five minutes later Fraser Mosley was on hand to receive Toby McRae’s inside pass following a strong run up the touchline for the bonus point fourth try, converted from out wide by Mr Reliable Anscombe. 28-0

The game then settled down into a more familiar pattern as the Vikings began to plug the gaps in their midfield defence. Dorking looked strong in both the set piece and the loose, winning several penalties as the Viking’s eight retreated under pressure. And it was fitting therefore that the Red & Whites’ fifth try on the half hour was another forward affair as Joel Grant, supporting a Finn Osborne drive crashed over in the top right corner. As half time approached, another scrum penalty led to prop Henry Birch grabbing Dorking’s sixth near the posts following consecutive forward drives. 40-0 as the oranges and changing rooms beckoned. 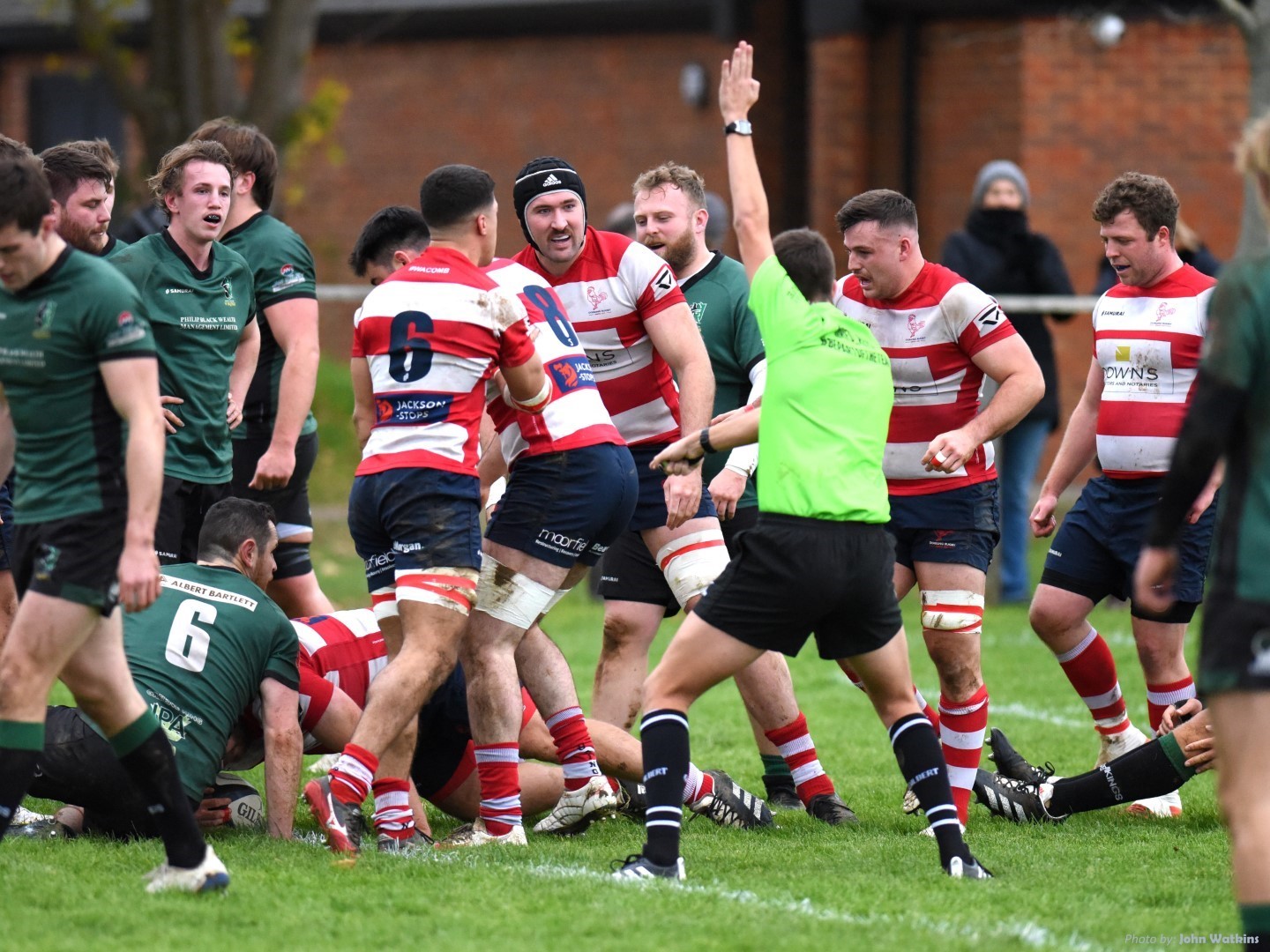 Having received instruction from their coaches during the break, a dogged North Walsham defence stemmed the flow of tries in the third quarter as Dorking employed all five of their replacements, losing it has to be said a bit of momentum in the process. Viking’s forwards and backs combined to put some good moves together, but they were unable to meaningfully break out of their own half as Dorking’s defence held firm, with Captain Fred leading by example. As the half wore on, Dorking’s forward power began to tell once more forcing the Vikings to give away penalties. This, along with Henry Anscombe’s probing kicks, pinned them back in their 22, forcing clearance kicks giving possession straight to the Dorking back three. Strong returns from Fraser Mosley and Andrew Ramsden created space for Toby McRae and Cam Cowell to run freely with Toby touching down for Dorking’s 7th try on the hour, and Mikey Macdonald the 8th on the 75 minute mark. With minutes to go Mikey jinked through a tired Vikings defence to score his second and Dorking’s 9th try sealing an impressive all-round performance by the Red & Whites.

“It was one of those days where certain parts of our game really clicked, and it was nice to see the smiles on faces as they enjoyed that performance.

Having the ability to empty the bench at half time was a luxury, but the over excitement to get our hands on the ball led to a few part of our game not sticking to our structure in that 3rd quarter.

We still managed to defend pretty well and I’m really proud of the teams grit and attitude at the moment.

I said to the guys that they should enjoy winning like that, as it is a result of hard work and commitment. TJ’s away next weekend will be a great test of our ability” 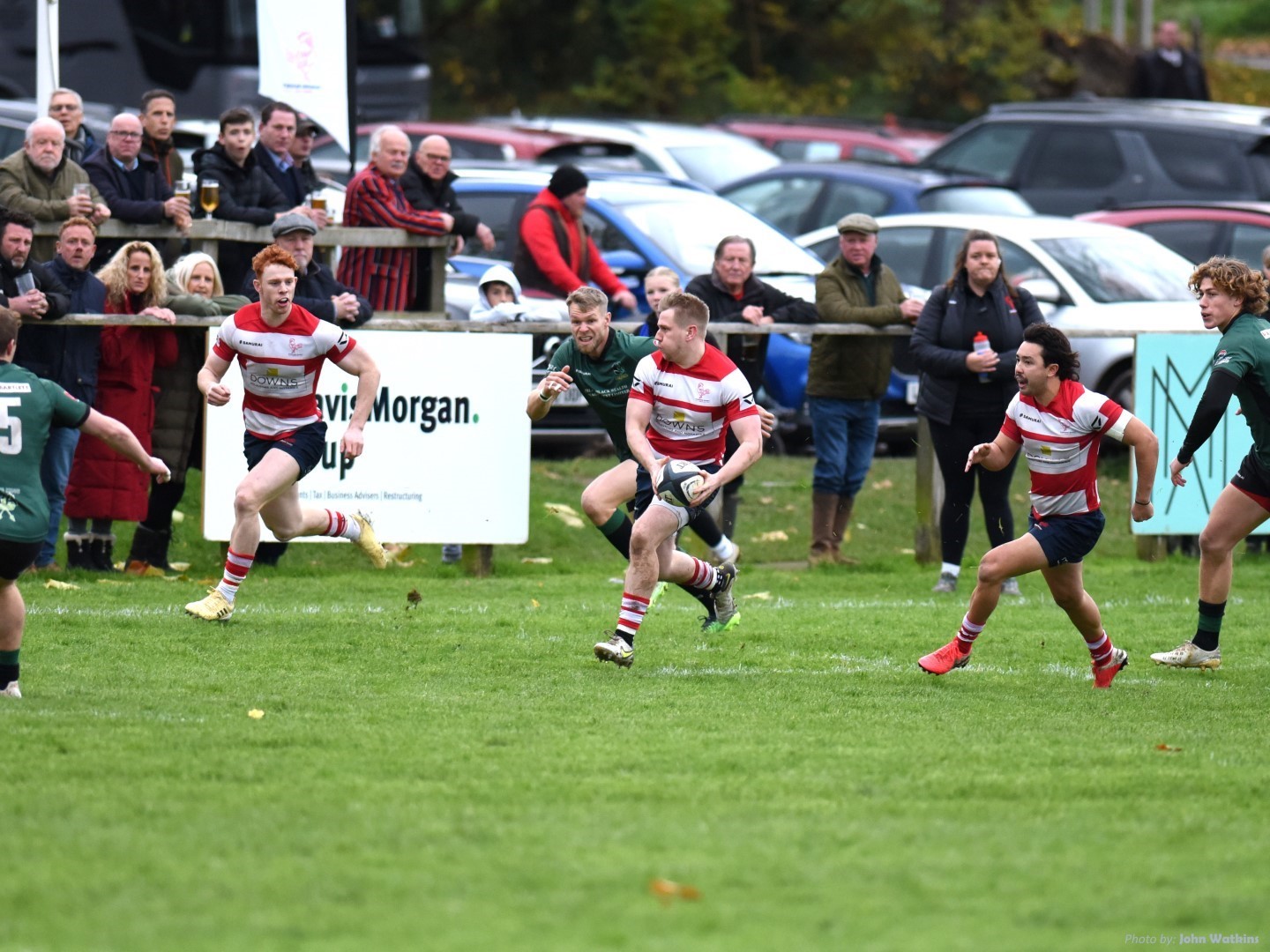