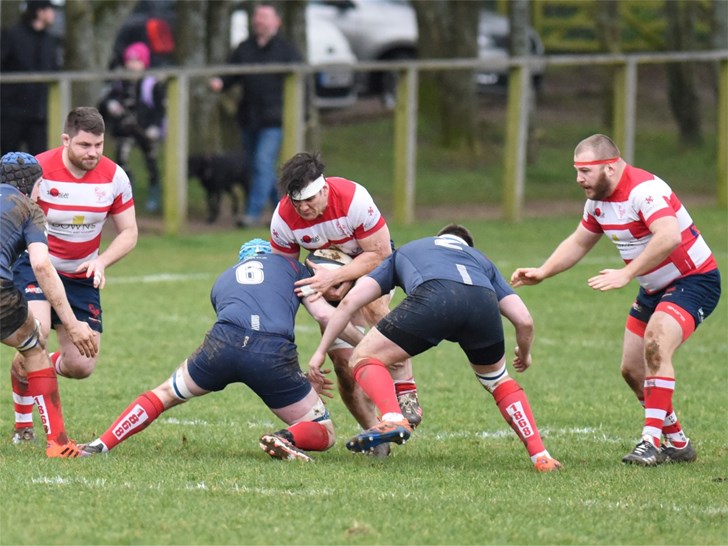 Before the match kicked off the thoughts of all at The Big Field were with the people of the Ukraine, marked by the raising of the Ukrainian flag and a 1 minute clap at kick off. Throughout the afternoon a collection raised over £4000 which will be sent to the Disasters Emergency Committee. Thank you to the combined supporters of both Dorking and Brighton.

The away fixture the foot of the South Downs earlier in the season had been played in a day of all four seasons weatherwise, with the red & whites running out 5-47 winners. The return fixture at the foot of the North Downs was played in similar conditions, but without the advent of summer as the skies remained stubbornly leaden. On the pitch it was a similar story too, with the red & whites eventually running out comfortable winners in the face of a determined Brighton side who defended aggressively and fronted up right to the final whistle.

Brighton kicked off playing downhill towards Kiln Lane. As with the fixture back in October, the first 20 minutes was a testing affair for both sides as the elements played havoc with the handling and promising moves from both sides ended frustratingly in a knock on or wayward pass. The set piece was pretty even too, although the Dorking line out seemed to misfire on occasion with promising attacking positions squandered. The deadlock was finally broken after 12 minutes with a short-range Matt Noble penalty as Brighton illegally snuffed out a Dorking foray into their 22. 3-0 to Dorking

The game then reverted to the familiar midfield tussle until Dorking’s Tom Bristow charged over just to the left of the posts from 15 metres out following a break upfield by no. 9 George Jackson and a deft left – right – left move between the back row and backs. With the conversion slotted easily by Captain Noble it was 10-0 to Dorking midway through the first half.

With both sides upping the work rate in response to the score, the play, frustratingly at times remained between the respective 22 metre marks, until just before the half time break when Dorking struck a killer blow. Picking up a ball taken against the head from a scrum on their 10m line, no 8 Harry Elbrow made good ground before slipping the ball to George Jackson, who fed the ball to prop Henry Birch, who found Henry Anscombe outside, who then rifled a long pass out to full back Cam Cowell coming in to the attack at full speed. A 20 metre break, a quick one-two with Ryan Jeffery and Ollie Rathbone to beat the Brighton defence, and the ball was back to Tyler Norwood for an unopposed sprint to the line. Try under the posts, converted, the half time whistle for the oranges and it was 17-0 to Dorking.

The second half started with a bang as James Catton, on for Jonny Ellis collected the ball from a line out and with driving support broke through the line making 20 or so metres, only to be hauled down and adjudged by Sir to have held on to the ball for a fraction too long. Brighton were unable to clear their lines from the resulting penalty, and Dorking were soon back on the attack with a perfectly weighted crossfield kick to the to the unmarked opposite corner resulting in Olly Rathbone winning the footrace for the touch down. Try awarded, conversion successful, Dorking 24 – 0 Brighton.

Despite now having the majority possession, the red & whites were made to work hard by Brighton with scrum half Cam Hayward and no8 Will Hoare in particular popping up all over the field in both attack and defence, and their forwards giving no quarter at the breakdown.  But you can only defend for so long and the concerted Dorking possession and pressure sucked in the Brighton defence leading to a try out wide on the right for winger Louis Flynn, again converted, 31 – 0. Five minutes later it was Captain Noble’s turn to cross the whitewash wide out left in a mirror image of the earlier score, again converted. Dorking 38 – 0 Brighton.

And despite play remaining in the Brighton half for the final ten minutes, tenacious defence kept the red & whites at bay, and following a rare Brighton incursion into the Dorking half, Captain Noble punted the ball into the crowd to end the match.

I am pleased with getting the 5 points today against a very spirited and driven Brighton side. We had to work hard in parts of the game, which I am pleased about, however we also were not as clinical as we should have been.

Another standout part of our game was our defence today and pleased the hard work away from match day are paying off.

We know that the challengers are all looking to knock us off our spot, so same approach this week as we prepare for Sutton and Epsom.