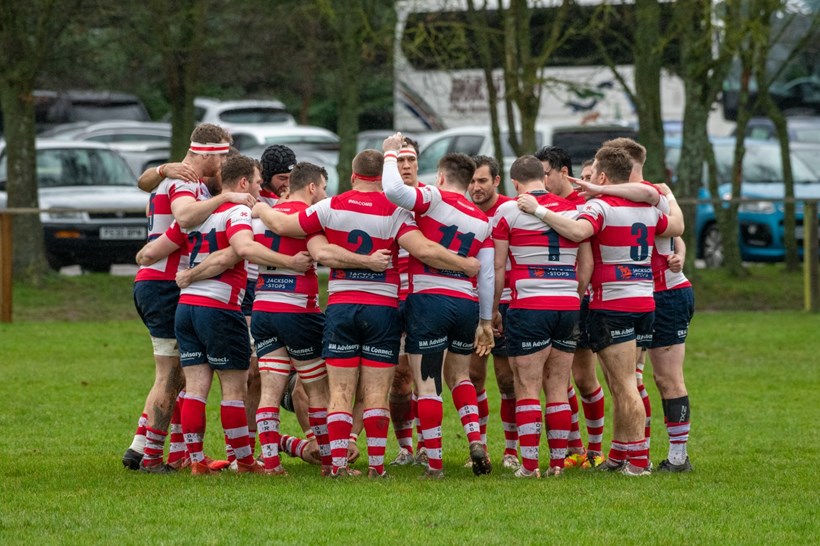 After an extended Christmas break the Dorking faithful were treated to a proper old fashioned winter game at the Big Field, where a dominant Dorking pack helped to secure a bonus point win for the red & whites in conditions that only the denizens of the wildfowl & wetlands trust would truly appreciate.

Dorking kicked off uphill with a slight breeze (and the rain) behind them and the first 10 minutes of the match were stop – start in the midfield as both sets of players found the ball hard to keep hold of. It looked as if first blood was going to Maidenhead as Dorking were adjudged guilty of a misdemeanour at the break down, well within kicking range, but a gust of wind intervened, and the penalty drifted just wide of the posts.

The weather app had been predicting that the rain would stop around 2.15, and lo it did. With the ball marginally less slippery as a result, the red & whites had the confidence to put together several phases of play taking the ball up field to the Maidenhead 5m line. A catch and drive at the lineout and Jonny Ellis was shunted over for the first try of the afternoon, with Captain Matt Noble slotting the conversion. 7-0 Dorking.

From the kick off, the ball remained in the midfield. Strong running from an in-form Fin Osborne kept Dorking on the front foot, and the front row trio of Charlie Connor, Jonny Ellis and James Catton were wreaking havoc at the set piece ensuring a steady supply of ball irrespective of who had the put in. The conditions however mitigated against a high scoring game and the crowd had to wait until just after the half hour mark before the pressure was turned into points, with flanker Joel Grant diving over for Dorking’s second try of the afternoon, duly converted by Captain Noble. 14-0

Receiving the ball from the kick off, Dorking were soon back camped on Maidenhead’s try line, and following a succession of scrums, Sir lost patience, awarded Dorking a penalty and carded the Maidenhead scrum half. Opting to reset the scrum, Dorking drove forward allowing no 8 Finn Osborne to chose his moment to drop on the ball for the third try of the afternoon, again converted taking the half time score to Dorking 21- 0 Maidenhead.

Refreshed by the half time oranges, Dorking returned to the fray with a bang. Debutant centre Louis Flynn collected the ball at the kick off and made 30 metres before being hauled down just short of the Maidenhead 22. In probably the best play of the afternoon the ball was swung first left and then right down the back line, with lock Jasper King on hand to receive the ball in full flight an unstoppable 5 metres out. Bonus point try, converted, Dorking 28 – 0 Maidenhead.

Outmuscled upfront and starved of possession, Maidenhead nonetheless refused to lie down and when they had the ball their back line looked aggressive and dangerous, the no. 14 in particular being very fleet of foot and only being prevented from scoring out wide by a fine cover tackle from Captain Noble.

‘Normal’ service was soon resumed as the Dorking pack took control and drove forward again, this time spearheaded by a bludgeoning run from Steve Howorth, resulting in Jonny Ellis driving over for his second try of the afternoon, again converted by Captain Noble. And shortly afterwards Finn Osborne was on hand to collect his second, picking up from the base of a 5m scrum and driving around the blind side to touch down. With the conversion successful, it was Dorking 42 – 0 Maidenhead.

Coach Roux emptied the bench bang on 60 minutes with Max Sheldrake, Daragh Chambers and Henry Smith coming on for James Catton, Jasper King and George Jackson. However, in spite of probing attacks from both sides the tackling remained resolute and there was to be no further score. And as Maidenhead pushed for a consolation try the ball was knocked on and from the ensuing scrum Matt Noble punted the ball into touch to end the game.

I'm very pleased with a good win at home in conditions that could of easliy been a hurdle for us. I thought the pack was outstanding today and to think we have not fired properly yet, is a scary thought.

We are taking it one week at a time and today was just a step towards that end goal. Hartford away next weekend will be a good test for us as they are going well.