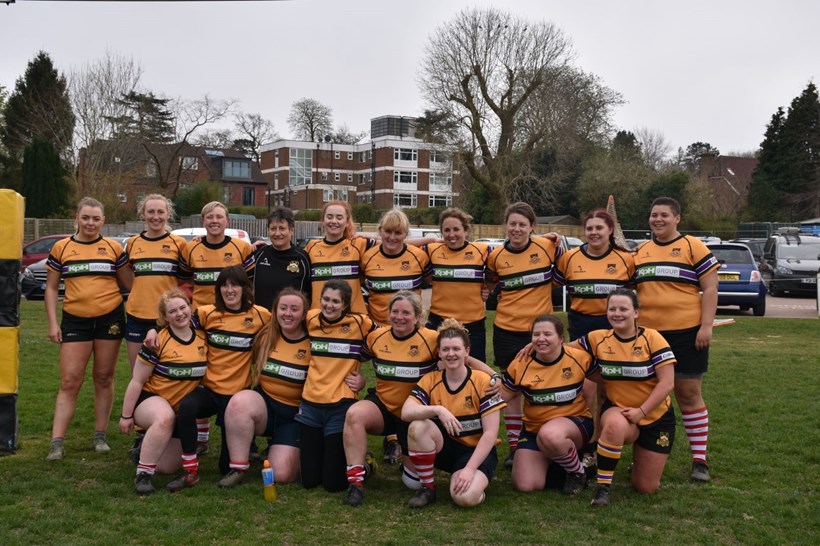 Mother’s Day – about the only day in the year when hard-working Mums might get treated to breakfast in bed, a slap-up lunch or a general day of rest. For some maybe, but the man (and it had to be a man) who organised the fixtures for the IWDL clearly hadn’t got the message!

Swanley’s Women’s Team (appropriately nick-named the Swans) were a few players short due to illness, but in true rugby spirit, 14 of them made the effort to travel over and fulfil the fixture for which we were grateful; several of our League matches have been cancelled as clubs have been unable to field a team.

The first 15 minutes of the game were hard-fought, with each team testing the other’s defences and assessing each other’s strengths and weaknesses.  Play moved up and down the pitch, and although the Swans got close to our try line, some great defence from the Dorking/Old Cats women (affectionately known as the Corks) kept them out. A series of strong carries got the ball back up to the half-way line, where Lauren found a gap in the centre and stormed through, only being brought down 5 metres from Swans’ try-line. Great support and quick ruck speed allowed the ball to be recycled out to the wing and Imogen ran in her first try of the match.

Swans came back strongly at the restart with some aggressive carrying and they repeatedly broke the gain line.  The Corks cover defence was phenomenal however, with only a couple of metres lost.  Turnover ball, quick hands and a couple of offloads saw the Corks back in the red zone looking for another try.  They piled on the pressure with some big carries and the ball was shipped out the back to our youngest player Lucia. Despite having played a full 70-minute U18’s match in the morning, she showed a quick turn of pace and scored in the corner.  10 – 0 up at half time.

The whistle blew to kick off the second half, and the Corks came out with guns blazing. Playing down the slope with the wind behind them, the floodgates opened.

Strong runs and offloads from the forwards, particularly Lauren, Lynne and Iva, led to Lauren charging through to score twice in quick succession. Solid running from the centres allowed Nat to race past defenders to score down the right hand side and Imogen to snaffle a wicked intercept from a loose Swanley pass 40 metres out and touch down under the posts.  Hard hitting pick and go’s from the base of the rucks took the forwards close to the try line and Lucie took a quick tap penalty to crash over under the posts.  And elusive running from within our own half saw Nat shrug off two defenders and storm down the wing to score again.   To keep her personal points tally ticking over, Lauren kicked two conversions.

Swanley, to their credit, were not prepared to leave without a fight and in the last 20 minutes, with good forward momentum from the base of the ruck, their No 4 broke free to score under the posts.  They successfully converted.  5 minutes later, they were on the attack again.  Strong defence from the Corks held them at bay and forced a turnover, but unfortunately the ball was knocked on and Swanley were awarded a scrum 5 metres out.  A great strike move out the back of the scrum saw their No 10 scythe her way through to touch down near the posts, and it was again converted.

The Corks were not prepared to let Swanley have the last say however, and a great kick chase from the restart was rewarded with a turnover just outside the 22.  After a few more skirmishes, Becky kicked the ball and chased it so hard the defending player kicked it out on a panic.  A clean catch from Kate at the Corks’ lineout allowed the ball to be released to the backs, quick hands down the line saw Imogen run in for her third try and Jas successfully converted.  Not to be outdone, in the final minute of the game, a break from Lucia and pop pass up to Becky saw her run over for our 11th try.

A hard-fought match which demonstrated how much we had improved since the start of the season, and a great victory for the Dorking/Old Cats women with the final score being 61 – 14 (we think!). Forward of the match was awarded to Lauren, Back of the match to Nat and most improved player to Iva.