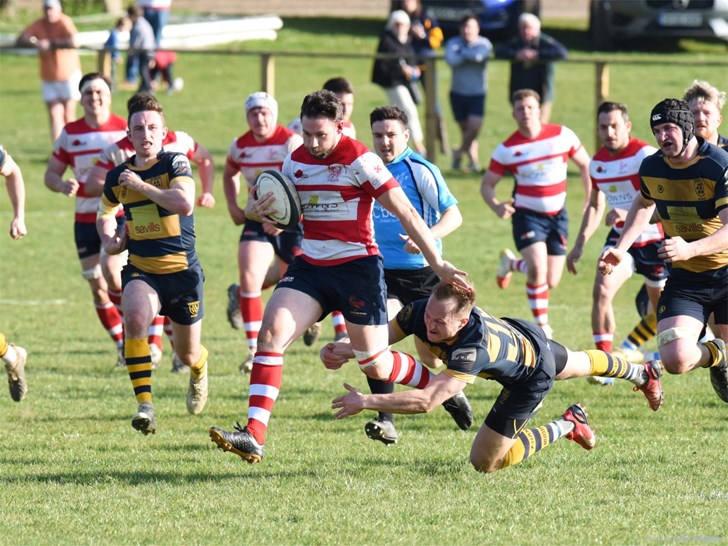 It was the perfect day for a game of rugby; a cloudless sky, the merest zephyr of a breeze, two teams on top of their games and a capacity crowd of some 1000 to watch. The previous game in November had been a tense affair with Oaks grinding out an 8-6 last minute win in slippery conditions. Today’s encounter promised much more with firm conditions underfoot and both sides at full strength.

Dorking chose to kick off playing downhill towards Kiln Lane and established good field position and possession, however all the time being met with robust cover defence in what was to prove a familiar pattern throughout the game. With Oaks’ defensive line up very quickly, the Dorking back line had very little time to operate and even spinning the ball wide, the key to most games this season failed to unlock the defensive gates. Some aerial ‘ping pong’ between both full backs also failed to yield much in the way of territory, and it wasn’t until the 8th minute that wing Ollie Rathbone found himself in the clear and able to evade the defensive tap tackle to dab down in the far left hand corner for the first score of the game followed by a finely take Matt Noble conversion to make it 7-0 to the Red & Whites.

Oaks infringed at the kick off allowing Henry Anscombe to clear the ball back into their 22, and from the lineout Dorking launched another promising attack, snuffed out by heavy tackling in the midfield and a ‘knock on’ in the tackle. Further Oak’s infringements after the scrum gave Matt Noble a long range penalty, but this was uncharacteristically scuffed wide of the posts.

From the 22 drop out, following several re-set scrums, Oaks worked the ball up field into the Dorking half and set up a rolling maul, where Sir adjudged that Dorking had infringed. Playing the advantage, the Oak’s 9 Matt Holmes slipped the ball to 10 Patrick Pellegrini whose sleight of hand wrong footed the Dorking defensive line leaving a clear channel open to the line. Conversion, despite the apparent lack of tee successful, 7 – 7.

Breaks from Harry Elbrow and Finn Osbourne ended with Sir awarding a penalty to Oaks, who cleared their lines and took play back up into the Dorking 22. It was Dorking’s turn to defend and clearing their lines play went back into the Oaks half where Fraser Macdonald and Cam Cowell made good yards, only for the ball to be prised loose in the tackle allowing the Oak’s full back to clear the lines. Dorking hands managed to curb the flight of the ball, where it was pounced on by the chasing Oak’s winger who sprinted clear, drew the cover defence and fed the ball to the supporting 8 Sean Derrick who was in unopposed under the posts -  a proper ‘poacher’s’ try, very well taken. The conversion, this time with the tee by 14 Ben Adams took the score to 7-14, it must be said somewhat against the run of play.

Dorking regrouped and continued to probe the Oak’s defences, crossing the line only for Sir to decide that the ball was held up. Collecting the tryline dropout, Dorking 8 Harry Elbrow took play back inside the Oak’s 22 and the ball was spun out wide to the left – again the Oak’s defence held solid and they cleared their lines. The Dorking line out had been functioning well all afternoon and play was soon back in the Oak’s 22. A penalty for ‘not releasing’ under the posts was quickly taken by Matt Noble, 10-14.

Dorking collected the ball from the re-start and kicked for territory. Fielding the ball, the Oaks full back Josh Livett opted to run the ball rather than return it. He found 10 Patrick Pellegrini in support, who, in a carbon copy of his earlier move, stepped inside and returned the ball to Livett, who in turn put 14 Ben Adams in the clear to make the score 10-21, Adam’s converting his own try.

Not to be outdone, it was Captain Noble’s turn to score as Finn Osborne collected the re-start and Cam Cowell spun the ball out wide for Matt to break three tackles and dab down out wide right. Converting his own try, it was 17-21 with half time approaching. But the half wasn’t done yet, and those thirsty spectators heading to the bar to beat the half time rush missed that man Pellegrini wrong footing the Dorking defence for the third time and racing in for his second of the afternoon, again converted. 17-28 as Sir blew for a deserved half time breather for both teams.

The second half started with a bang as Oaks pressed the Dorking line with a 5m line out. Turning the ball over, Dorking cleared their lines giving Oaks a line out half way between the 22 and 10 m lines. Some uncharacteristically sloppy passing between the Oaks centres allowed Matt Noble to intercept the ball, break two tackles and sprint a full 60 metres to the line leaving the defence in his wake; not too shabby for a veteran…. who then had to draw breath and convert his try taking the score to 24-28.

The game continued at a ferocious pace between the respective 22 m lines, with both sides yielding nothing (except a yellow card for Dorking’s Tyler Norwood) to the other until midway through the second half when a break by Oaks 13 put Captain Nigel Gumbleton playing 12 in the clear for try no. 5, converted by the reliable Adams taking the score to 24-35.

Dorking upped the pressure and immediately took play back up into the Oaks’ 22 where they were awarded a penalty. With time running out, they opted to kick for the corner and a catch & drive lineout. Dorking 2 Jonny Ellis was convinced that he had scored, but the hand of fate intervened, and Sir ruled that an Oak’s hand was under the ball so no try. Continuing Dorking pressure from the try line drop out yielded another penalty, again kicked to the corner. Another good catch and a promising move out left was snuffed out just short of the line by a deliberate knock on resulting in a Dorking penalty, plus a yellow card for the miscreant Oaks 14, who had averted what looked to be a certain try with winger Jeffery unmarked and in the clear.

Dorking were unable to take advantage from the penalty; Oaks stole the ball and cleared their lines and it was Dorking’s turn to defend, which they did for the next five minutes, eventually breaking out with a strong run up field by Cam Cowell. With George Jackson in support and Jonny Ellis acting as scrum half at the breakdown, the ball was fed to Finn Osborne, who broke through and offloaded the ball to Fred Dalton for a sprint to the line and an unconverted try. 29-35.

The remaining five minutes saw Oaks kicking for territory and Dorking running the ball back. Again the Oaks defence was resolute, and as the Dorking pack crossed the line ‘en masse’ once more for what looked like the winning score under the posts, Sir denied them for a third time (correctly as it turned out from the match video) calling an ‘accidental offside’ and a 5m Oaks Scrum. And following three re- sets that’s how the game finished as Oaks secured the ball and Pellegrini closed out the match by kicking the ball in to touch.

Onwards to North Walsham next weekend where the result takes on added importance! All support welcome.

“Disappointed to not get the win on a big day like to today, but it was not for the lack of effort or desire from the players.

If we are honest with ourselves, were not clinical enough in certain areas of our game and we gifted Sevenoaks a couple of easy points which they took very well.

It was your typical “top of the table clash” and we were a few decisions away from being very good.

No time to ponder too much, this week is North Walsham and we need to really step it up to keep our campaign alive”