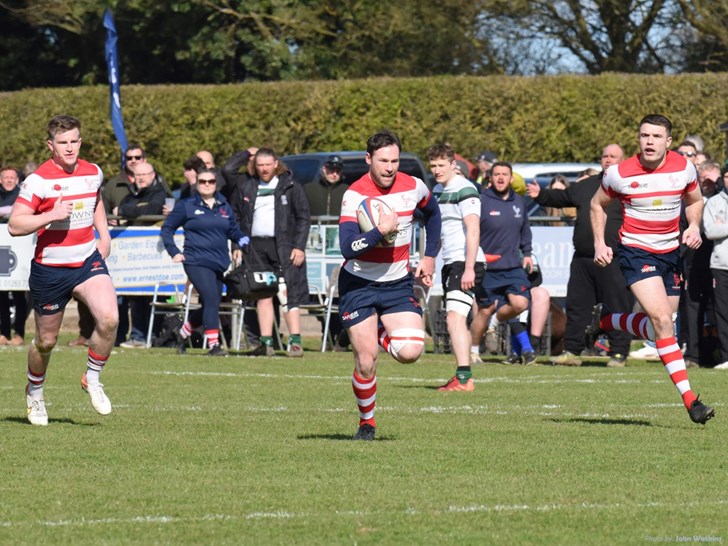 The longest away fixture in the calendar saw a posse of Dorking supporters make the 150-mile trip up to North Norfolk; some making a weekend of it and others travelling there and back on the day. Either way the lads were well supported with plenty of red & white on the touchlines, our thanks to our North Walsham hosts for their welcome and hospitality.

The home fixture back in early December saw Dorking running out 23-17 winners and a similarly close encounter was expected for the return match. And so it proved to be in an action packed afternoon with the result in the balance right up to the 80th minute and a Dorking side reduced on two occasions to 13 men due to ill-discipline, a statistic which was ultimately to cost them the match.

Dorking kicked off playing into the sun but with the wind, such as it was to their backs. With barely three minutes gone Cam Cowell was over in the far left hand corner, Fraser Macdonald having kicked through a dropped Vikings pass for him to chase down. With the conversion missed, Dorking were in the lead 0-5.

Taking the ball back into the Vikings 22 from the re-start, Dorking were awarded a penalty which they chose to scrum. Vikings held firm in defence and Dorking were forced to re-think the point of attack spinning the ball down the back line and then back into the forwards for James Catton to barrel over from short range, only to knock on over the line as the Viking defence dislodged the ball from his grasp. From the 5m scrum Vikings cleared their lines and play moved back to the midfield. The Vikings back line was looking sharp in attack but were unable to break the Dorking defence, and as the clock nudged past 10 minutes played, Captain Noble intercepted the ball and just as last week, sprinted clear of the chasing defence to touch down, and convert under the posts. 0-12 to Dorking.

This seemed to shock the Vikings into action and from then on the match became a far more even affair. The next 20 minutes saw Dorking very much on the defensive as the Vikings back line let rip and flanker George Masdin crossed the whitewash twice, once converted to even the scores. With unforced errors and a high penalty count against them the red & whites were unable to break out of their own half and things took a turn for the worse as lock Steve Howorth and flanker Tyler Norwood both left the field with injuries. To compound things, prop Charlie Connor was handed a red card as a set piece scrum collapsed right in front of the posts. Reduced to 14 men, Dorking could only watch as fly half Matt Hodgeson kicked the Vikings into a 15-12 lead shortly before the half time whistle.

The second half began with Dorking sacrificing a back for a forward to maintain parity up front, a risky strategy given the potency of the Viking’s backs, but necessary to try and wrestle back control of the game. It backfired somewhat as full back Cam Cowell was forced into an illegal cover tackle three minutes into the half to halt the flying Viking 14 reducing their numbers to 13 as Sir issued the inevitable yellow card. Somehow Dorking were able to steal the ball back from the line out and clear their lines taking the play back into the Vikings half. Sensibly keeping the ball in the forwards and using their backs sparingly, Dorking were able to keep play in the Viking’s half and forced a kickable penalty which captain Noble gratefully accepted. 15 all. And despite their reduced numbers, they managed to work the ball back up into the Vikings half from the re start, pressurising the Vikings defence and eventually creating space for Louis Flynn to score wide out right. A difficult conversion into the breeze sailed through the uprights, and Dorking found themselves 15-22 in the lead.

With Cam Cowell back in play Dorking again pressurised the Viking’s defence and were able to repel their attacks with fierce defence. As both sides began to tire from the pace of the game, Dorking seemed to be getting the upper hand, and with the Viking’s penalty count increasing they found themselves 15-25 ahead as Captain Noble slotted another with some 20 minutes of the match remaining.

But the extra effort required when playing a man down was beginning to tell and the game looked very much in the balance as the Vikings repeatedly probed the Dorking line and defences, denied only by a knock on over the line before replacement winger Chris Godwin broke through the tired Dorking back line for a try under the posts, converted by fly half Hodgeson. 22-25.

Dorking retained possession from the re start and forced the Vikings to give away a penalty just outside their 22. Meat and drink for Matt Noble, 22-28 and some 10 minutes to go.

The Vikings back line pressured the Dorking defences again, but a combination of rushed decisions, knock ons and robust defence kept them away from the try line. A tired tackle by centre Fraser Mosley was adjudged by Sir to be illegal and with minutes left on the clock Dorking were back down to 13 men. Vikings kicked for the corner and retaining possession from the line out spun the ball out wide left, drawing the Dorking defence out with it, and then back right. As we all know, the ball travels faster than the man and the resulting gap, enlarged further by a serious injury to centre Ryan Jeffery allowed fly half Hodgeson free passage to dab down under the posts and then convert his try. 29-28 and the final whistle. Joy for the Vikings, heartbreak for Dorking.

Disappointed with losing in such cruel circumstances as it was not a true reflection of how good we can be, but that said, all credit to North Walsham for taking full advantage of the numerical advantage.

I’m very proud of the Dorking players for the way the put their bodies on the line and really working for each other. The fact that we played with 13 men for 15mins of the second half and still be 6 points clear with 1 min to go was one hell of a effort.

No time to sulk about it, as we got 2 games left with the next one being Wimbledon who will be looking to spoil the Dorking Party.