Dorking hold firm to take the honours in a tightly contested game under leaden skies at The Big Field.

A sell out lunch celebrating club Partners Downs Solicitors along with the end of club stalwart Fraser Macdonald’s playing career stretching from the U7’s to the 1st XV meant a crowd of over 500 braved the elements at The Big Field as Dorking welcomed back Guernsey Raiders for the first time since 2019. 7 places and 10 points separated the two sides, but in this extremely competitive league that means nothing and the ‘faithful’ were anticipating a hard game. And so it was to prove.

It all started so well as in the first move of the game Captain Fred Dalton broke through the Guernsey defence to touch down under the posts. An easy conversion for fly half Henry Anscombe, and the Red & Whites were 7 points up with barely two minutes on the clock. But not for long, as Guernsey hit back immediately from the re-start with a driving maul from their large set of forwards, from which hooker Dan Morgan emerged claiming the score. As slightly less easy conversion from fly half Charlie Davies levelled the scores at 7 apiece and four minutes gone.

The half then settled into what became a familiar pattern; good attacking moves thwarted by sturdy defence on both sides and a plethora of offences at the breakdown by the Guernsey forwards. This unfortunately had referee Katherine Ritchie reaching frequently for her whistle and the match became something of a stop start affair (‘One for the purists’ is I believe the technical term). Both sets of lineouts seemed to be functioning cleanly, although the gusting wind made accuracy hard to accomplish and there were several turnovers from both sides in promising attacking positions. In the set piece scrum, in spite of the Guernsey forwards larger size, it was Dorking who seemed to be the more dominant, disrupting their put in and shunting them backwards and winning a couple of scrum penalties. With the wind gusting from the south west, Dorking scrum half Mikey Macdonald opted for the quick break rather than the box kick whilst his opposite number Sam Boyland did the opposite. As a result play remained resolutely between the 22 metre lines of both sides with the try line rarely threatened. Both sets of forwards looked strong but cancelled each other out. Both sets of backs likewise. And as the half time whistle went, it was still 7 apiece. 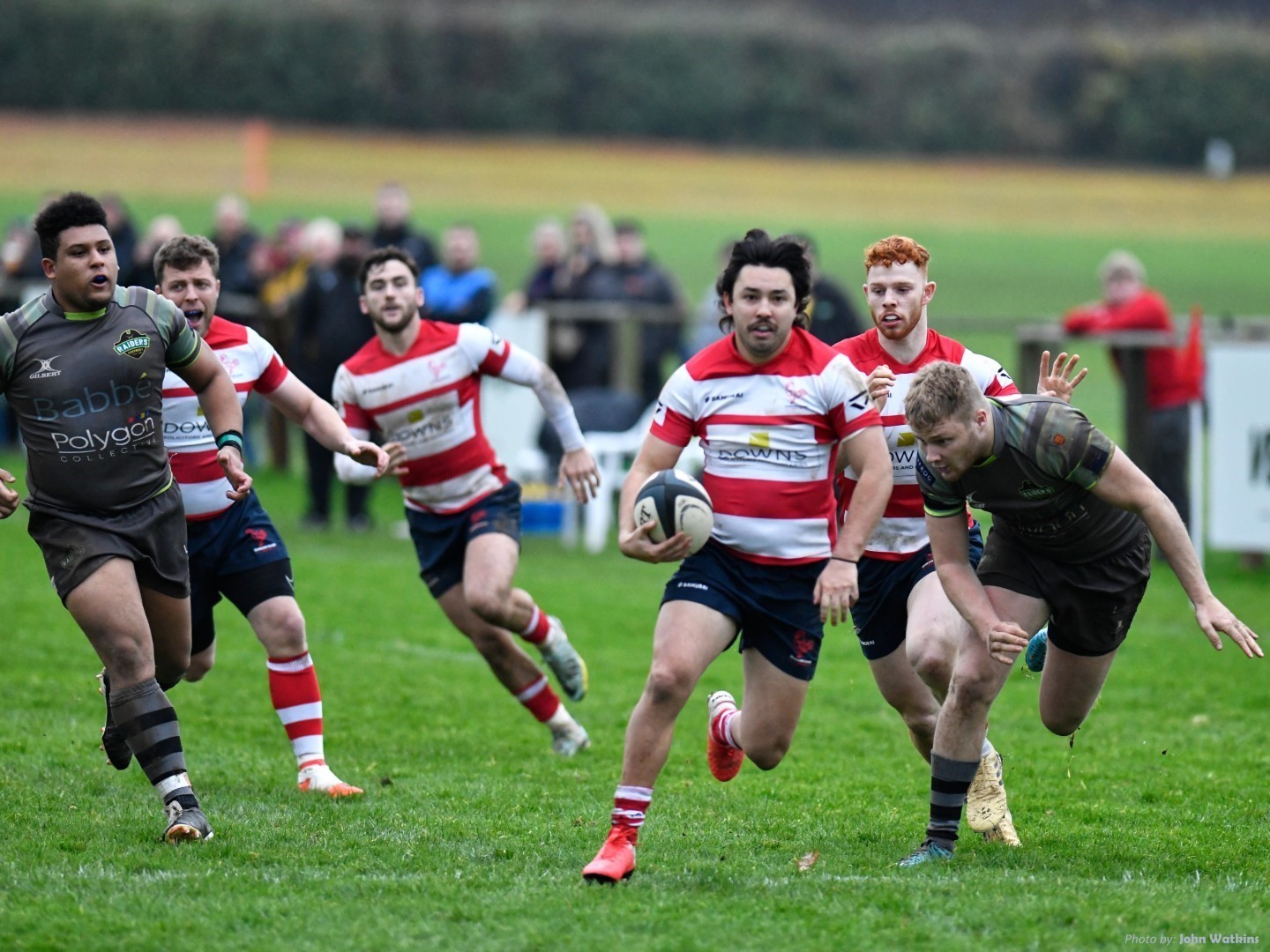 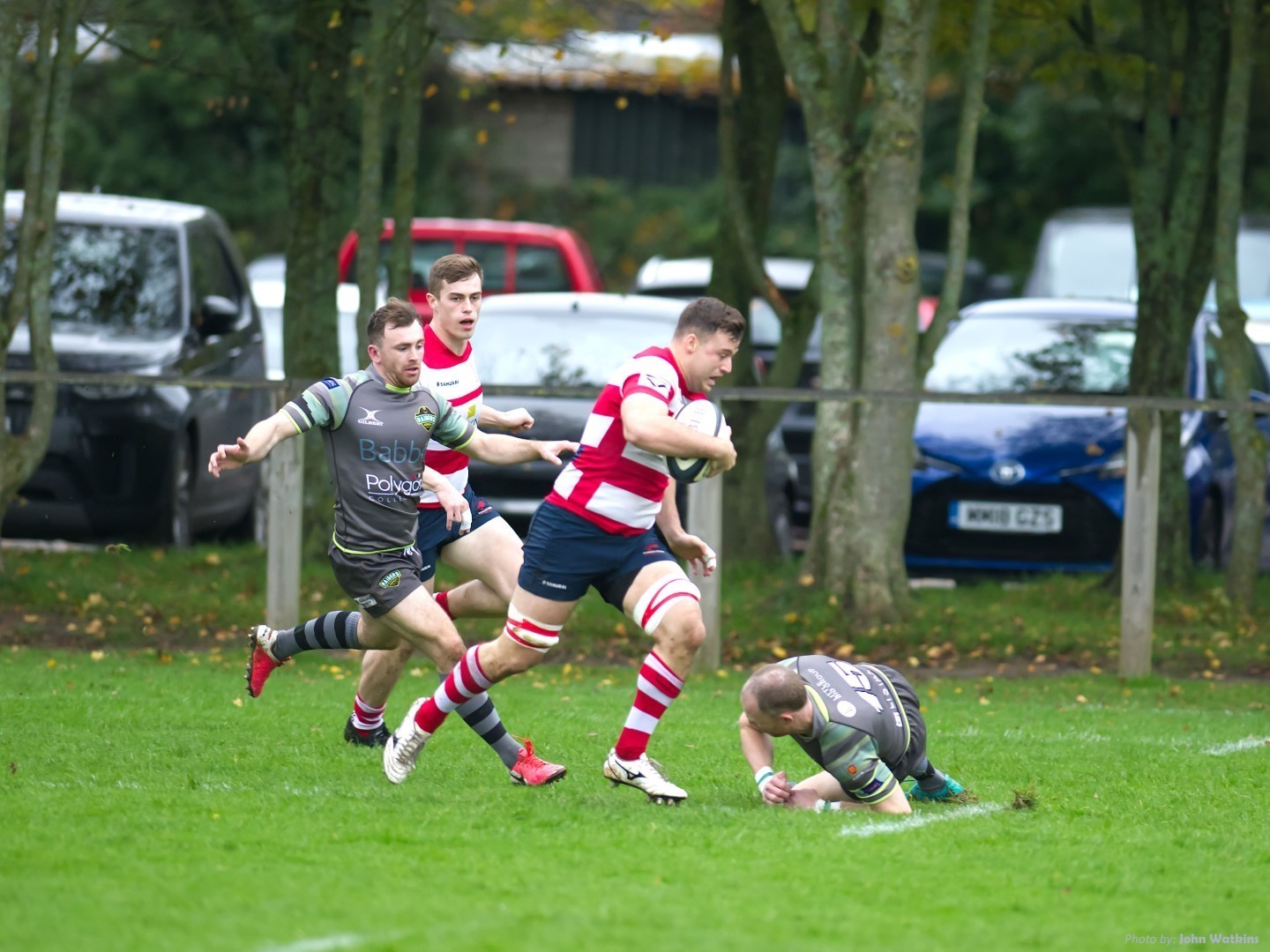 Playing uphill but with the wind, Dorking started the second half as they had the first, with a try. From the kick off, the Guernsey forwards gave away yet another penalty which was kicked into touch around the Guernsey 10m line. An athletic line out catch from Dorking  lock Will Scholes was quickly moved down the back line to full back Andrew Ramsden who broke through the Guernsey defence beating two defenders to put wing Toby McRae away in the top right hand corner. With Henry Anscombe’s conversion kick from out wide good, the Red & Whites took a 14-7 lead after just 5 minutes of the half.

From the re-start it was Dorking’s turn to give away some penalties; two in quick succession, the second of which was well within range for Guernsey’s Davies, taking the score to 14-10. Further Guernsey pressure had the Dorking Defence working hard and eventually the lines were cleared and Dorking were back on the attack, only to be called back on half way for a forward pass. Guernsey infringed in the subsequent scrum and taking advantage of the following wind, Henry Anscombe slotted an ‘in off’ goal.  17-7. Fresh legs in the forms of Jasper King and Max Sheldrake, on for Steve Howorth and Henry Birch respectively added momentum for Dorking and following a 5 minute period pressing in the Guernsey half a further penalty within Henry Anscombe’s range drifted just wide in the wind. A further 10 minutes of attack / defence / penalty from both sides, Dorking now joining in on the ruck infringements saw nothing to remotely trouble the scorer, although the skills on display and commitment from both teams was impressive, each cancelling the other out. On the 70 minute mark, following a period of Guernsey pressure, the Dorking backs were adjudged to be offside, and Guernsey 10 Davies slotted the easiest of penalty goals directly under the posts. 17-13 with at least 10 to go. 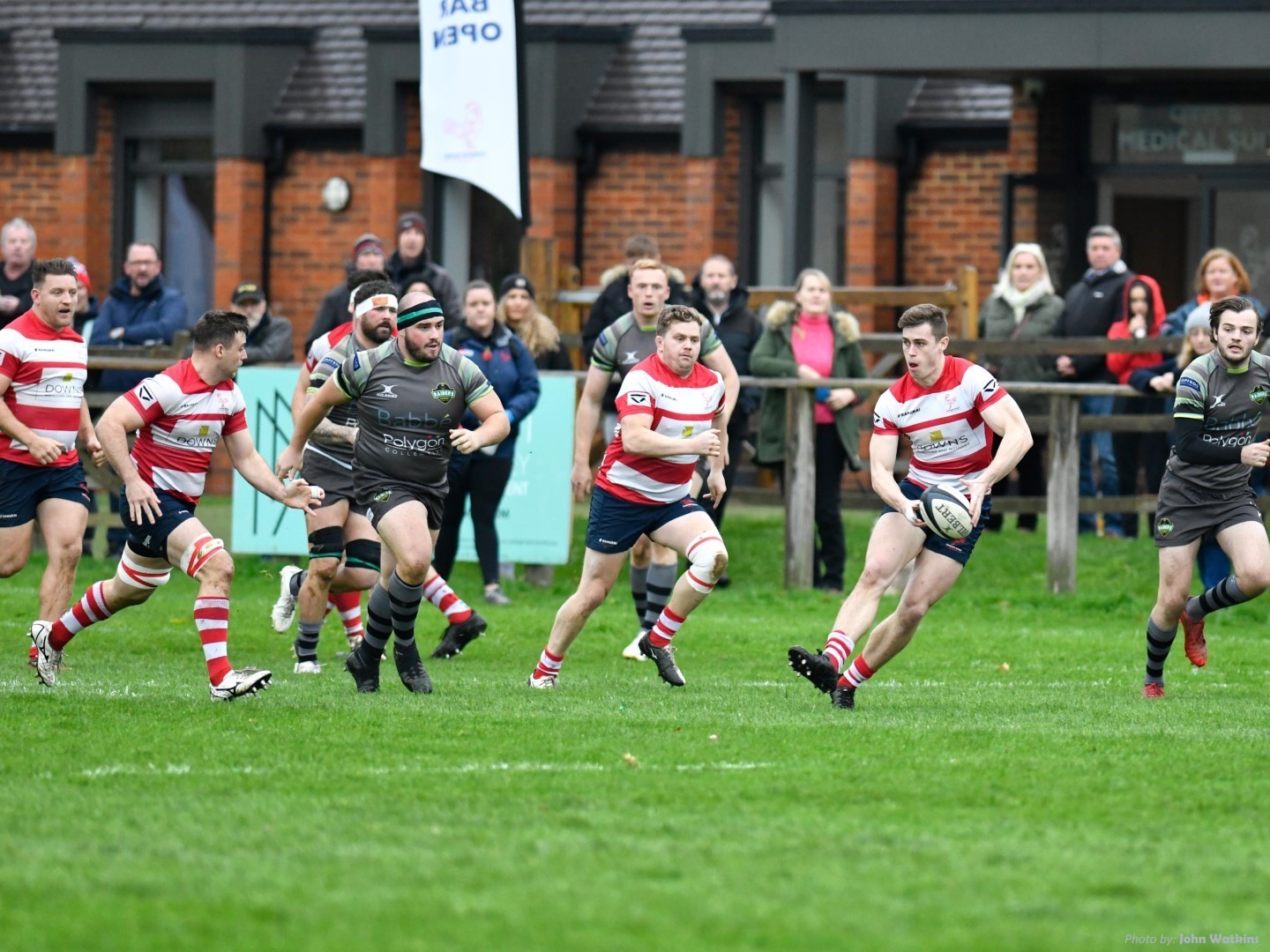 Needing a try to win the game, Guernsey upped the pressure from the re-start and kept play firmly in the Dorking 22. An eminently kickable penalty was eschewed in favour of a kick to the corner and a line out on the Dorking 5m line. We all knew what was coming, and it did - A clean catch and drive which was strongly repelled. Illegally as is turned out, resulting in a yellow card for Tom Bristow. Down to 14 men for the final few minutes the Dorking defence held firm, and in the closing gloom closed out the win as Guernsey were forced into a knock on chasing the try they needed to win.

“Another week of being super proud of this group of players. They truly love being in the trenches together and it showed again in their application today.

We had plenty of opportunities today, but some poor discipline and the lack of executing basics under pressure in certain areas really stopped any momentum.

I never for 1 second doubted that our defence will not be up for the contest, and they did themselves proud today by working hard and getting off the line.

Guernsey played some good rugby today, with a clear focus on executing the simple things well, and credit to them for their abrasive approach.

We now firmly turn our focus to Henley, as we know it will be a tough test, but the players are up for” 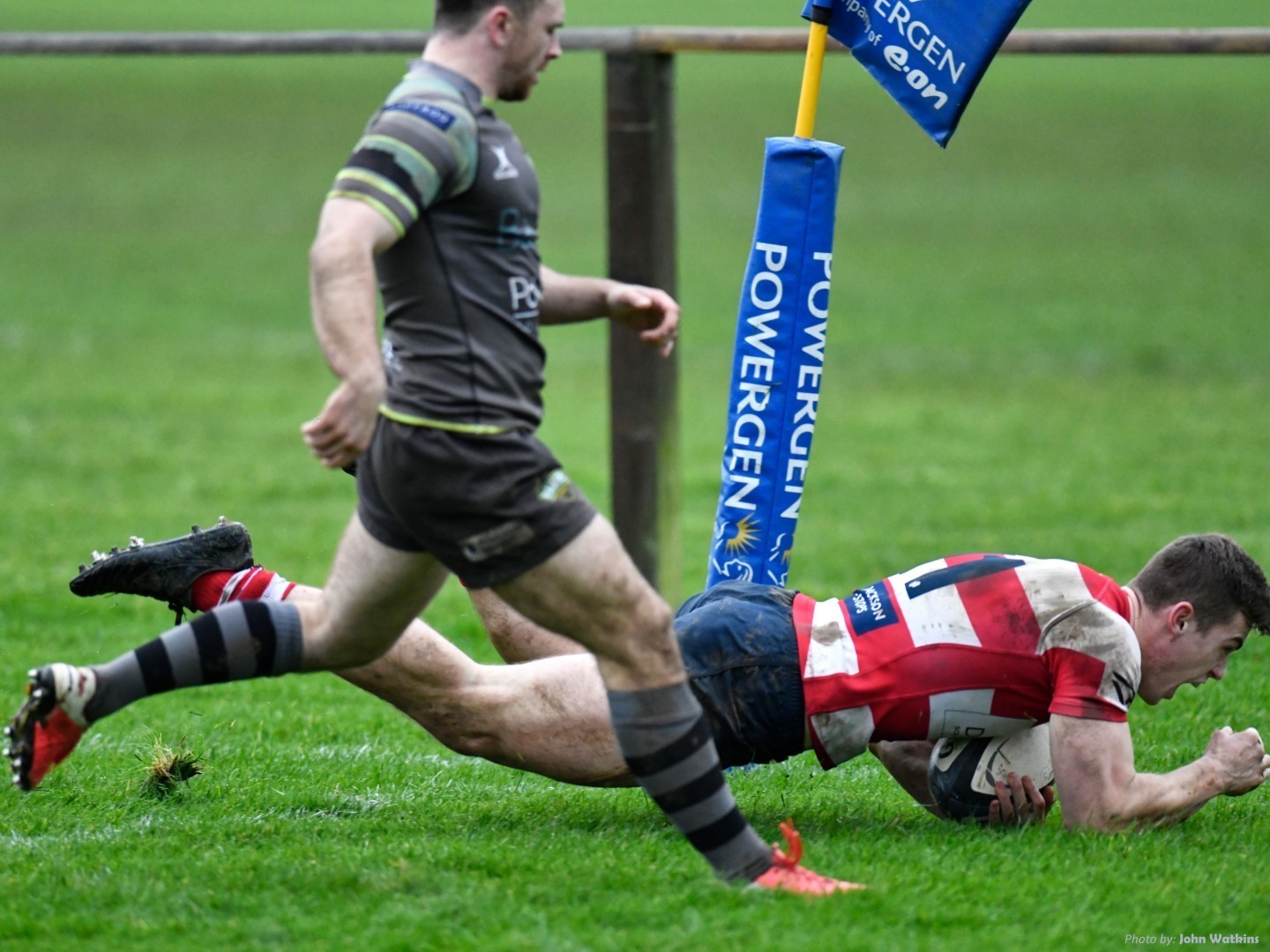