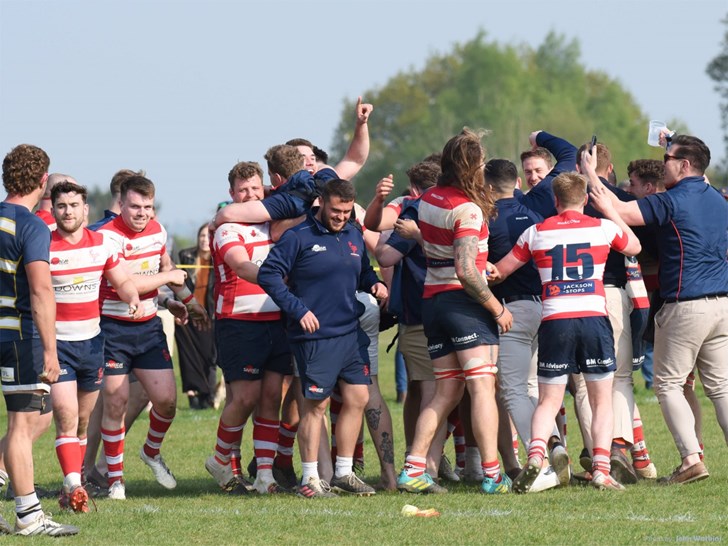 It would be fair to say that the past three seasons’ matches at TW’s St Mark’s ground had not gone entirely to plan for the red & whites, with 3 losses out of 3 trips. So despite the form book, and the thumping victory over Wimbledon 2 weeks ago, who themselves had put an admittedly weakened TW side to the sword 3 weeks ago, the faithful supporters were somewhat nervous on arrival. And rightly so as a scrappy first half littered with penalties meant that it was not until the second half that the team was able to cut loose and show what it could do.

Dorking received the ball at kick off playing downhill and with the cross field wind marginally at their backs. The game quickly settled into what was to become a familiar pattern in the first half with good yards being made, only for the ball to be coughed up in the tackle, whipped away from the intended recipient by the gusting wind or for a promising move to end up with a penalty for sundry offences on the deck unseen by the supporters but spotted by eagle eyed Sir. This, coupled with the TW 8’s marauding runs meant that a lot of effort went unrewarded until 7 minutes into the match when centre Barney Davies did his best Fraser Macdonald impression and crashed over out wide left. With the gusting wind the conversion was always going to be difficult and so it proved, with Henry Anscombe’s kick drifting wide of the posts.

Making the most of the wind and the slope, Dorking pressed the TW defence with both ball in hand and long range kicks, and despite some spirited counter attacks they were 0-12 ahead after 20 minutes as scrum half George Jackson dummied from the base of the scrum and found a clear path to the try line under the posts. A far easier conversion for Henry Anscombe, duly taken.

It was then TW’s turn to get on the score card, with no 7 Toby Talbot crossing the line after and knock on and a failed Dorking attempt to run the ball out of their 22 followed by a Finlay White conversion. 7-12.

A further series of penalties and unsympathetic passes meant that the Red & Whites were struggling to turn possession into points until Finn Osborne broke from the base of the ruck and supported by momentum from Tom Bristow, drove over for his first, and Dorking’s third try of the afternoon, easily converted by Henry Anscombe. 7- 19. As half time approached, the question on the touchline was would a 12 point margin be enough? And as this was reduced by 3 points following a Finlay White penalty, the answer was possibly no. But in the last move of the half, Finn Osborne settled nerves with a well taken try, again easily converted by Henry (Call me Matt Noble) Anscombe. 10-26 at half time.

Playing uphill and into the wind in the second half, Dorking kept the ball in hand, and it was TW’s turn to punt the ball down field for territory. A misjudged penalty kick saw the wind take the ball over the dead ball line, and a Dorking attacking scrum in the TW 22. Repeating his earlier dummy, George Jackson broke for the line only to be held up resulting in a goal line drop out.

Working the ball back into the TW half, centre Barney Davies shrugged off two tackles to feed the ball out wide to Cam Cowell, eventually finding wing Louis Flynn who somehow managed to stay infield, and at considerable cost to his hamstring, touch down out wide right. The hardest of conversions across the face of the wind neatly bisected the posts. 10-33.

Keeping the ball in hand was paying dividends for the red & whites as they proceeded to run the game from thereon, with Finn Osborne claiming two more tries and Fraser Mosley and Barney Davies another apiece. Finn’s first of the second half and third of the day came as Joe Spurgeon stole a TW lineout, Henry Anscombe made a solid break supported by the back row and after a couple of quick ruck balls, Finn was on hand to barrel over the line. Try converted, 10-40. This was followed in quick succession by a penalty from Henry under the posts as an increasingly outclassed TW defence were caught offside again and issued with a yellow card. 10-43. Dorking’s 7th try came from a training ground move which saw Henry Anscombe lofting the ball wide out left for wing Olly Rathbone to chase and collect, which he duly did, slipping the ball inside for Fraser Mosely to score. 10-48. It was then time for Finn Osborne to get on the scorecard once again as the Dorking scrum held firm for a clean pick up and drive over the line, try converted by Cam Cowell, 10-55.

And in the final move of the game, Barney Davies topped and tailed the score card with his second of the game as tiring TW bodies were unable to put him down. With the conversion successful, the final score line read TW 10- 62 Dorking.

As Sir’s whistle drew the season to a close, Dorking were able to celebrate a well deserved return to National League 2, in whatever geographical form the RFU decide that this will take.

“We always knew that Tunbridge will start well and using the slope in the first half was part of the plan so we can so we can really try and impose ourselves with the hope of it paying dividends in the second half, which it did, so credit to the players for sticking to script.

TW’s gave us some grief at the breakdown which resulted in a couple of penalties against us, but that said we continued to work hard and it came good as the game progressed.

Today we achieved a season goal, and that was to get promoted. The fact that we had those boys not in the 18-man squad there to support the players was a testament of the unity this senior squad has developed of the last few years and really pleased about that.