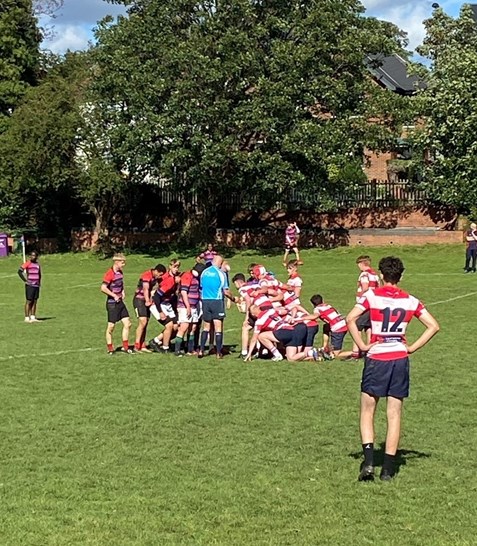 Dorking Colts made the journey to Croydon for their first Waterfall Cup game in good spirits after a dominant win against Reeds the week before. With a largely unchanged squad and 21 boys switched on from the moment they arrived (in stark contrast to the opposition) the omens were good.

Dorking started the game playing down the substantial slope and with the unexpected sunshine (after Saturday's monsoon) on their backs. We received the kick off and immediately made inroads into the Old Whitgiftians' half with some slick handling. Dorking dominated the first five minutes of the game with OWs barely getting a touch of the ball, although some big (and questionably legal) hits from their defenders suggested this was going to be a battle.

After last week's uncontested scrums, our boys finally showed what they could do after some expert coaching from former Premiership player Tom Bristow, winning the first four scrums against the head, despite the home side fielding a substantial pack. From the first of these Dorking moved the ball quickly down the left and two phases of play later, when it looked like the chance had gone, Ned powered over for the first score from short range.

OWs finally managed to go through a couple of phases of possession before Jamie was (harshly) invited to spend 8 minutes on the naughty step for a 'seat belt' tackle, shortly to be followed by an OWs player for a similar offence. Fortunately that was the end of the yellow cards.

Dorking continued to dominate despite having no scrum half. A break down the right saw Jack fire out a wide miss pass to the wing which seemed to deflect off an OWs player but the Dorking try was disallowed for a forward pass. An even better passage of play saw Callum go over the line on the other side of the pitch after some fantastic handling. Unfortunately the referee adjudged him to have stepped over the dead ball line before grounding, so another score was chalked off.

Shortly afterwards Callum made amends by coolly slotting a penalty to give Dorking an 8-0 lead.

Dorking continued to pile on the pressure and a lovely line break by Jack looked to be in vain as he juggled the ball but he managed to regather it and feed Mete who powered over under the posts for a converted try.

So the first half ended with Dorking leading 15-0 but in the knowledge that we had left at least another three tries out there.

The boys knew the game wasn't over, particularly as OWs had the substantial slope in the second half. The challenge became even harder when Dorking destroyed another OWs scrum shortly into the second half and the referee decided to make them uncontested for the remainder of the match.

While this clearly favoured the home team, they seemed so surprised at winning their own scrum on their 5 metre line that the scrum half threw a poor pass out to the OWs 10. The ball ended up on the floor over their own line and with OWs napping, Craig sprinted in to touch down and claim the try. Archie slotted a difficult conversion for the extras.

Dorking continued to pile the pressure on OWs and following a lovely break from Giulio, captain Michael ran a great cut back line to break the OWs defence to score the pick of the Dorking tries. With the conversion successful, Dorking moved into a commanding 29-0 lead.

The game then got very scrappy. Dorking dropped a couple of simple passes and took a few wrong options, inviting OWs to attack the Dorking try line. Dorking's defence, however, was superb all day and the boys repelled wave after wave of OWs runners. Dorking then managed to turn the ball over and feed Kester who set off on another of his barnstorming runs. He stepped at least three defenders and powered his way almost the length of the field. From the ensuing ruck, Dorking should have scored again but a knock on was picked up over the line by the OWs winger who made the most of the space to run the length of the field and score under the sticks, despite a valiant chase from Archie.

Dorking had finally conceded a try in over two hours of rugby.

This was pretty much the last play of the game, with Dorking victorious 29-7. This was another excellent squad performance with all 21 players contributing. The boys know that there will be tougher tests to follow, but that we also left a number of points out on the pitch. Great support from the parents and a quick beer after the game in bright sunshine was swiftly followed by the return of the Croydon monsoon season.

The coaches wanted to mention Mete, Kester, Ollie and Ned who lead from the front and had great games.