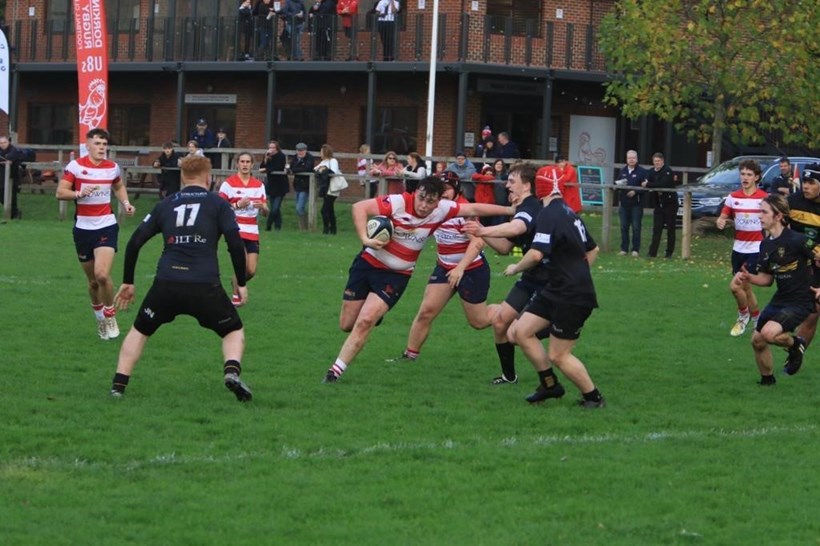 Dorking Colts had to wait until mid-November for their first home fixture of the season but it was worth it. Having been drawn away in the first two rounds of the Waterfall Cup, Dorking welcomed Esher in the final group fixture, knowing that a victory would see them through to the final.

The Club laid on the works for the boys, with a full warm up led by Dan McKenzie and a chance to play on the first-team pitch.

Playing with the slope on a surprisingly wet pitch, Dorking put immediate pressure on the visitors. A catch and drive from an early line out, 10 metres from the Esher line, saw hooker Lewis Gover tidy up a loose ball and feed the backs. After a misplaced pass it looked as though the move was over but shrugging off a tackle without the ball, wing Charlie Nicol demonstrated all of his footballing skills to nudge the ball forward a couple of times and touch down in the right-hand corner. Captain Oli Shepherd added a difficult conversion for a 7-0 lead.

Dorking then went to sleep momentarily. After some Esher pressure, the visitors broke up the blindside taking advantage of an overlap to score out wide. 7-5 and game on.

Esher were really starting to contest in the forwards, putting pressure on the Dorking scrum and making their hosts work hard at the breakdown.

Dorking were not quite connecting but went back to basics with a scrum 5 metres from the Esher line. With a solid platform up front, number 8 Henry Page was able to pick and drive from close range and power over for the try. 12-5

Esher were now struggling to clear their lines. From another scrum in their 22, the Esher backs showed great ambition in trying to run the ball out. However, Dorking’s defence was outstanding as it was throughout the game. From a tackle the ball broke loose and centre Chris Styles knocked it between the posts and beat the covering defenders to touch down. 19-5

The Dorking pressure continued to mount. Following a series of pick and goes on the Esher line, which the boys had worked hard on in training in recent weeks, Owen Rowlands drove over to score but the referee was unsighted and awarded a goal-line drop out instead. Dorking were undeterred and after a bit of good fortune scored again. Leo Rennie did well to field a line out under pressure and the Dorking forwards began to drive towards the line. The greasy ball squeezed out the side of the maul and Lewis Gover reacted quickest, picking up the ball and powering over between the posts. 26-5 at half-time.

Dorking knew the job wasn’t done yet and that there was more to come after a fairly disjointed first half. They soon put that right.

The Dorking forwards began to put more pressure on the Esher line out and turned the ball over on the Esher 10-metre line. A beautiful strike play saw the outstanding Henry Page punch a hole through the Esher back line. A pass out wide saw Archie Shires power over from the 22 to score in the right-hand corner. Callum Powell slotted the conversion from the touchline. 33-5

Dorking then scored the pick of their tries to thoroughly demoralise their opponents. Esher were camped on the Dorking line, going through the phases and sending in wave after wave of heavy forward runners. The Dorking defence held firm and a big hit by flanker Tom James allowed him to strip the ball in contact. Starting out from their own try line, the Dorking backs realised there was space out wide. Some quick hands saw Charlie Nicol given the ball 60 metres out. He stepped round a couple of players and powered home to cap a sensational length of the field move. 38-5

Dorking were soon at it again with a near carbon-copy of an earlier try, Henry Page powering through to feed Archie Shires on the Esher 22. He beat the covering tackle to score again in the right-hand corner. 43-5

The Dorking pressure was now unrelenting. Winger Giulio Barbato broke up the left wing and despite a big hit driving him backwards was able to offload out of the tackle. This took the Esher defence by surprise and some quick hands saw Chris Styles slice through the defence for a second try to bring up the half century. 50-5

There was time for one more score. Following a powerful Dorking scrum on the Esher 22, the backs ran a set play, pulling the ball back to feed man of the match Charlie Nicol to finish off proceedings for the hat-trick try. A bout of handbags under the posts convinced sir to end proceedings 10 minutes early, leaving the final score 57-5.

This was another outstanding team display by the Colts, unrelenting in defence and quick thinking in attack. The boys know there is still much more to come and that they will have to be at the top of their game in the final against Farnham on 27 November. A special mention for Dan McKenzie who has done so much to get these boys into such great shape and gave up his Sunday morning to prep the boys for the game. 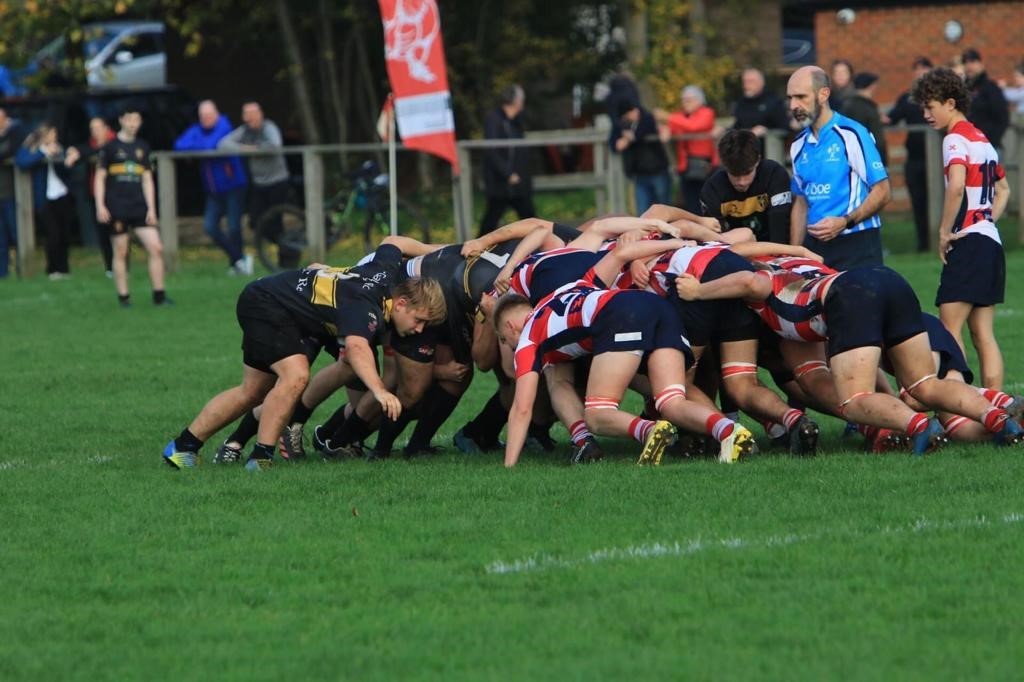