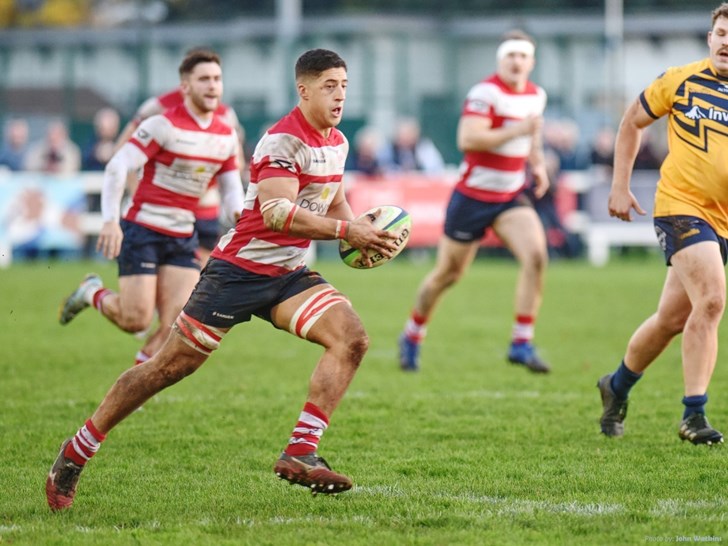 History repeats itself as the Cocks down the Hawks

Dorking travelled to Henley Hawks Dry Leys ground on the banks of the river Thames for only the second time in their history hoping to repeat their victory of April 2015**. With only two veterans of that day still on active duty, but both sadly sidelined by injury, it was left to Director of Rugby Armand Roux and Team Manager Newks to spur on today’s team with tales of glories past.

With both sides having 6 wins from 9 games the travelling and home support were expecting a tight contest, and as the players lined up for the minutes silence in remembrance of those who made the ultimate sacrifice, it was noticeable that the Henley team were considerably larger than their Dorking counterparts in almost every position. The anticipated ‘hard day at the office’ was it seemed to become a reality.

Dorking kicked off in brilliant sunshine and immediately gave away a penalty for being offside at the breakdown, but regained possession as winger Austin Emens intercepted a slack pass between the Henley backs. As the ball bobbled loose in the subsequent tackle, Henley were adjuged to have knocked on, but Dorking infringed in the ensuing set piece scrum. Dorking alumnus Will Crow, now sporting the no. 9 shirt for Henley (well he does live 10 minutes walk from the Dry Leas ground and it’s 50 miles to Dorking so I suppose we can forgive him) took a trademark quick tap and go. A bit of aerial ping pong ended with full back Cam Cowell’s clearance, a Henley line out, a collapsed scrum and a penalty to Dorking. A Finn Osborne break from the base of the scrum was quickly snuffed out, but again Henley knocked on in the tackle, and again Dorking gave away a free kick in the set piece. This time the potential of Henley’s backs was realised as 13 Louis Flynn cruised over in the top right corner for the first score of the afternoon. An easy conversion for the Henley 10, Max Titchener and after 10 minutes they were leading 7 – 0. The Dorking response didn’t quite go to plan as no 8 Finn Osborne received a yellow card for an over robust tackle as they took play into the Henley 22 at the re-start. Able to relieve the pressure and take play back up into the Dorking half, it was Henley’s turn to apply pressure, and as the Dorking back line pressed up they were adjudged offside giving Titchener another easy shot at goal. 10-0. In what was becoming something of a stop – start game, Henley then knocked on from the kick off, gave away a penalty in the set piece scrum and Henry Anscombe uncharacteristically missed what for him was a relatively simple shot at goal.

With Finn Osborne back on the field a full strength Dorking pressured the Henley defence as wing Austin Emens received the 22 drop out, sidestepped the oncoming defenders and slipped the ball inside to the supporting Andrew Ramsden. A long miss-pass found Toby Mcrae out on the wing, and with an unopposed dash down the touchline he was in for Dorking’s first try of the afternoon, converted by Henry Anscombe. 10-7 with nearly half an hour played.

Henley responded immediately, putting the Dorking set piece under pressure and forcing a penalty on the half way mark for wheeling the scrum. The on- target Titchener kicked for the corner and from the rehearsed catch and drive play the ball popped out for scrum half Crow to touch down for Henley’s second converted try. 17-7. With a further penalty goal attempt missed, that’s how the score stood at half time. 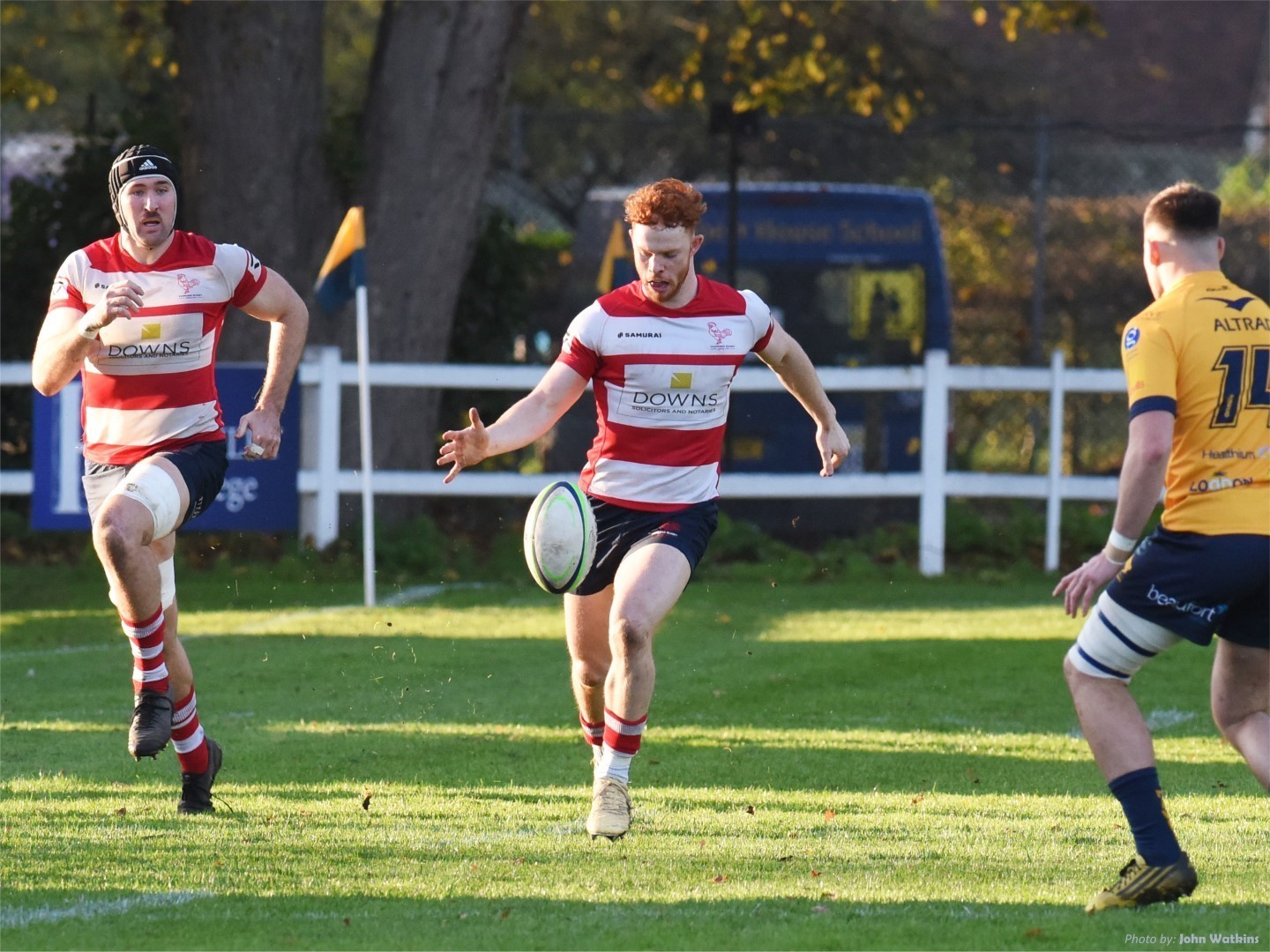 Dorking started the second half well taking play into the Henley 22 and winning a penalty. With the lineout not straight, Henley cleared their lines and took play back into the Dorking half only to give away a penalty themselves. A solid catch by Finn Osborne in the line out, quick ball down the back line and Austin Emens was over in the top right hand corner for his first and Dorking’s second converted try; 17-14. At the re-start it looked like Dorking might be about to take the lead as lock Will Scholes found himself in open space with Fraser Mosley in support. But the defence was good Henley cleared the ball downfield from the resulting penalty for holding on. But in this see-saw game Dorking were soon back on the attack as the Henley forwards infringed; Another solid line out and quick ball down the back line, but the move went awry and the Henley 12 James Davies intercepted the ball and sprinted unopposed to score under the posts. An easy conversion took Henley to a 24-14 lead with 25 minutes left to play.

Dorking came straight back and began to dominate the midfield with captain Fred Dalton leading the charge from the forwards, and a fired up Fraser Mosley the backs. So it was fitting that it was Fraser who scored the next try as Finn Osborne picked up from the base of a scrum on the 10m line starting a move that included all of the back line, to make the score 24-21 with 15 minutes to go.

Increased Henley pressure was met with increased Dorking defence, forcing errors on both sides, but as Dorking held firm, Finn Osborne was able to pick up and clear from a defensive scrum feeding Cam Cowell who evaded three tackles and made some 30 metres before handing on to Austin Emens. The ‘sidestep of the day’ flummoxed the Henley defence, and Austin was in under the posts for his second of the day, a converted bonus point try. 24-28.

The final 8 minutes saw Dorking absorb everything Henley could throw at them, and with seconds left on the clock it seemed that Henley had done enough as a rolling maul collapsed over the line. Consulting the assistant referee for what seemed an eternity and with a hushed crowd, Sir decided that the ball was held up short, called Captain Fred over for a talking to and awarded Henley a penalty. Once more the Dorking defence held firm and a knock on following the Henley line out drew the match to a close.

We always knew that Henley would be a tough test away from home, and they did not disappoint.

We had a few opportunities in the first half, but Henley defence seemed to always be able to get across and make the tackle, so credit to them.

Some great resilience shown by this Dorking team and I am very proud of the performance.

We will go away and review what we can work as few areas were not as slick as always, before we host North Walsham in 2 weeks time.

Man of the Match – Austin Emens 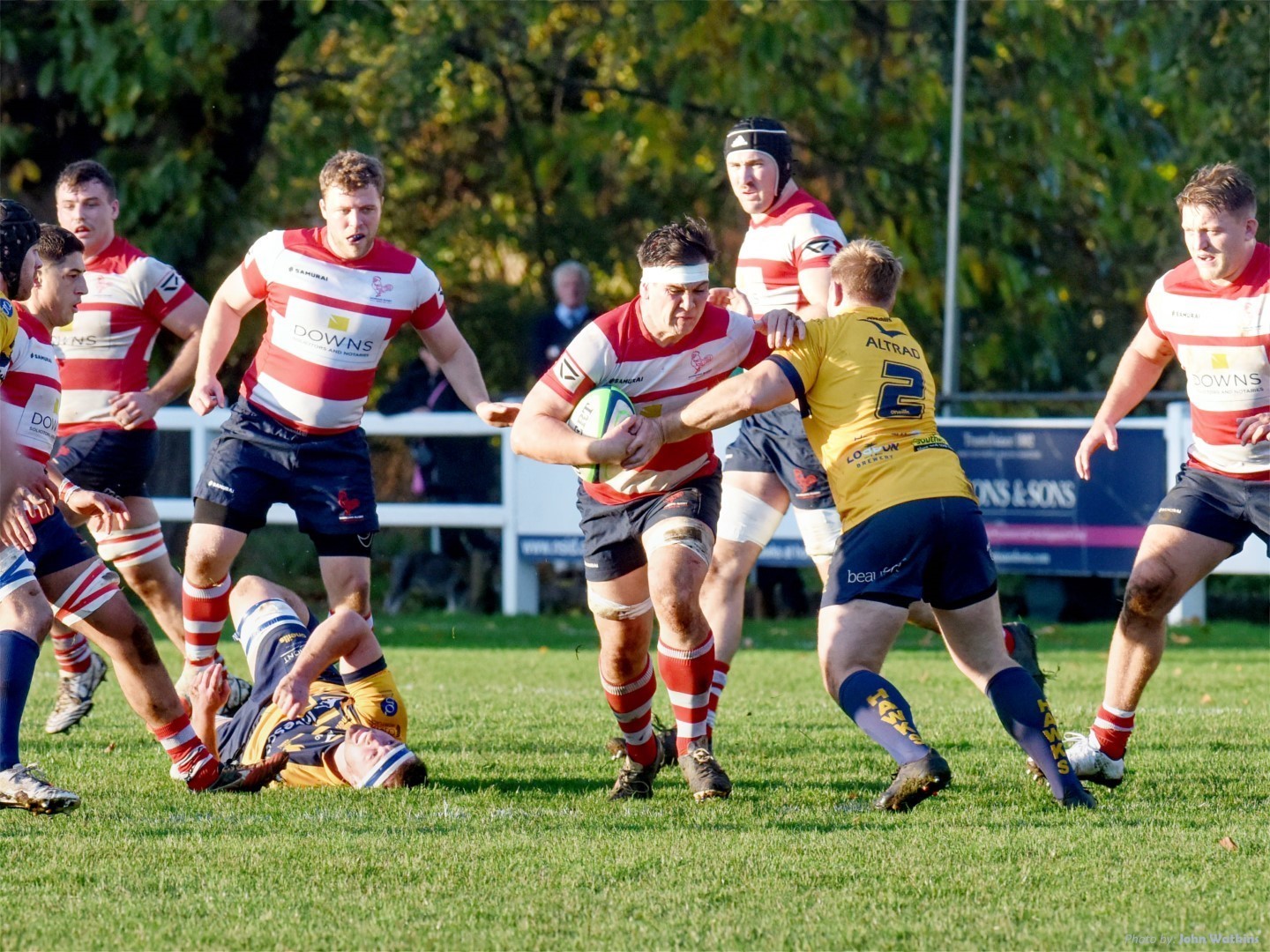