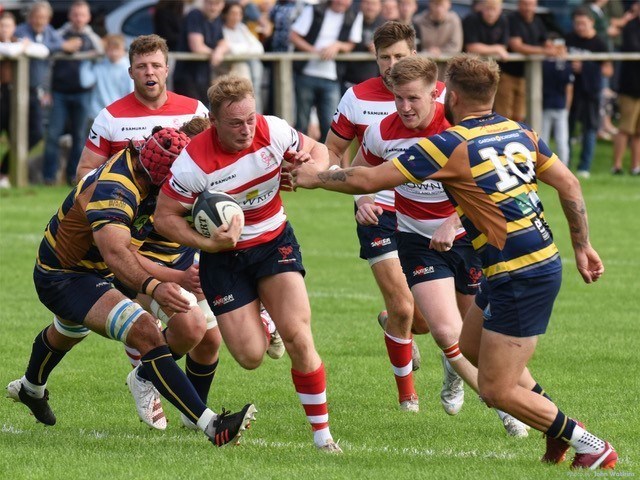 A Big Win for Dorking at The Big Field

A fine second half performance saw Dorking run out comfortable 44-24 winners at The Big Field, having turned round at half time with the scores at 19-14.

Playing down the slope, Worthing kicked off and started strongly determined to impose themselves on the game. With barely three minutes gone, following a penalty kick to touch and line out, Raiders no.15 Curtis Barnes crossed the whitewash following a slick back line move, converted by no.10 Harrison Sims. 0-7

The Red & Whites hit back with slick hands of their own taking play back up into the Worthing half. Sustained attacking pressure coupled with a fiery defence kept play inside the Worthing 10 metre line and following a clean lineout catch and a couple of quick ruck balls, lock Will Scholes was over for Dorking’s first score of the afternoon with fly half Henry Anscombe adding the extras. 7 all. And five minutes later it was time to do it all again as Scholes went over from short range for his, and Dorking’s second of the afternoon. 14-7.

A period of concerted Dorking pressure yielded no further scores, and from a stolen line out the Raiders cleared their lines. Collecting a turnover ball Barnes, not to be outdone was in for his second of the afternoon followed by Sim’s second conversion. Score 14 apiece and all to play for.

Collecting the re-start kick off, Dorking no.8 and man of the match Finn Osborne stormed up field and slipped an inside pass to supporting Captain Fred Dalton who was over in the corner for Dorking’s third. With the conversion missed the half time score was Dorking 19 – 14 Worthing Raiders. 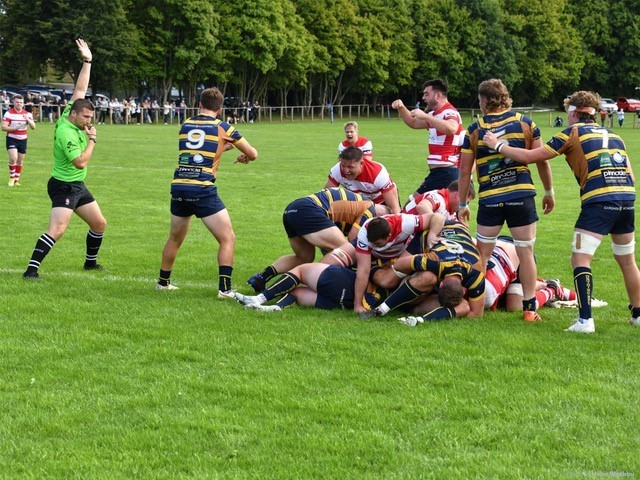 As the second half started Dorking, now playing downhill kept up the pressure and following a succession of pick and drives in the Worthing 22 added a further 7 points with a fine solo effort from no.9 George Jackson who dummied from the base of the ruck to go clear under the posts, converted by Anscombe. 26-14. It was then Worthing’s turn to keep the scoreboard operator busy as an intercepted pass put winger Jake Golding away in the top left corner, unconverted, taking the score to 26-19.

Tired limbs and a couple of (hopefully) minor injuries led to Coach Roux deploying reinforcements from the bench as messrs Birch, Scholes, Jackson, Jeffery and Connor made way and messrs Sheldrake, Chambers, Macdonald, Pimlow and Powell (on for his first cap) entered the fray. Fresh legs invigorated the side resulting in two further tries by no. 11 Toby Mcrae and a cracker out wide by former Worthing front row player Henry Birch, back on to cover for an injury to Steve Howorth. These, along with a conversion and two further Anscombe penalties, one from around the 55 metre mark (it’ll be 65 by tomorrow evening) sealed the result.  An 80th minute try from Raiders no.16 Thomas Hatch gave the visitors a consolation bonus point for the 4th try.

In closing - special mention to ‘veteran’ Dorking no2 James Catton who did 75 mins vs Blackheath and the full 80 shift today. Last seen in the medical room calling for oxygen……..(Surely the bar calling for a Moretti???)

“It was a real pleasing performance; we stuck to our game plan and executed the simple things well.

Lots of credit to the Dorking resilience shown today as we made a few forced changes that and they simply got on with the task.

Worthing created and executed a couple of cracking opportunities, and I am sure they will bounce back well after that.