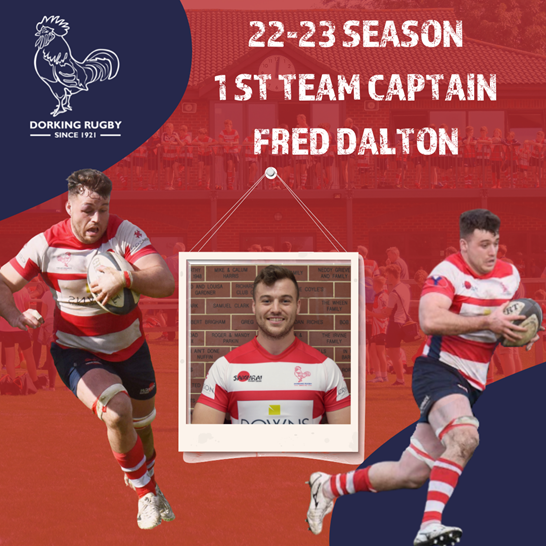 Fred has played for Dorking Rugby since he was a mini and youth player before heading off to Plymouth University straight after Colts.

Fred made his National 2 debut when he was 18 playing for Dorking 1st Team against Launceston back in 2015.

Fred was vice captain in our promotion campaign last season and will be taking over the reigns in our return to National 2 after a very successful season and was voted as the 'players player' of the year.

“I’m honored to lead the team this year with Dorking RFC being my boyhood club! It is a privilege to be in this position and 16 year old me would not believe it - Armand can attest to that!

Following on from such a successful campaign last year, we have a fantastic group of players and coaches raring to get stuck into Nat 2 rugby, supported by a fantastic set up and the wider club.

A special mention to Nobes who played a big role in my development as a leader over the last few years - I learnt from the best! I look forward to seeing familiar and new faces down at The Big Field this coming season”

Armand Roux our Director of Rugby had the following to say about Fred’s Appointment:

“Fred is not only a cracking rugby player but also a true DRFC ambassador in everything he does. He has earned the players and coaches respect with a calm & collective nature but has an uncompromising work ethic that is simply exemplary.

We have a couple of quality leaders in our squad, and they are all very supportive of Fred’s appointment and I have nothing but excitement to see how Fred will be going about his business while leading Dorking into this new era".