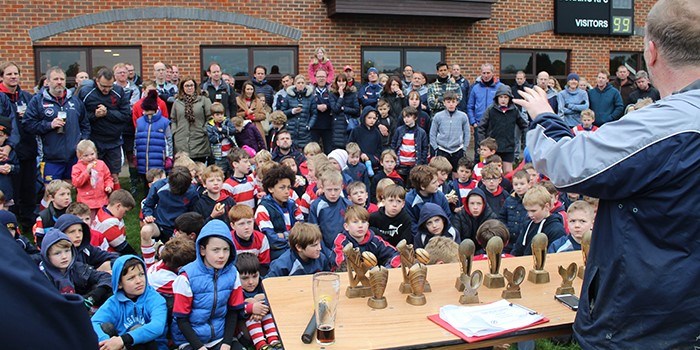 Celebrating the end of the Season with the Minis! 2017/18

It was a fantastic close to the season for the kids yesterday as the Big Field was flooded with boys and girls who were in great spirits and having loads of fun.

Each of the individual age groups held their own mini awards ceremonies and then came together at the sessions for a free BBQ (funded by the Christmas Hamper Raffle). A huge thank you to our brilliant BBQ volunteers who somehow managed to feed several hundred hungry kids and still keep smiles on their faces!

Then we were onto the awards… Well done to all of the children this year, who have really put their hearts into training and matches, wind rain and (not so much) shine.  A particularly big Congratulations to the following award winners:

All that was left, was for the role changes for next season to be announced.  Leo Kane handed the baton over to David Hemmings who will be taking over as Mini Chair.  It was a very touching moment, when David took the time to lead everyone in thanking Leo with a round of cheers, and presented him with the inaugral Minis Chairman Tankard for Outstanding Contribution to the Minis Section – we’re fairly certain that the crate of Fosters was also very gratefully received!

And finally, it was only fitting that the legend that is Julian Ching was thanked.  Julian has been an outstanding Youth Chairman for a number of years.  His contributions to the kids at DRFC have been immense and everyone who has passed through the minis and Junior sections of the club will know the huge efforts that he has put into the clubs success.

Thank you Jools – for everything.