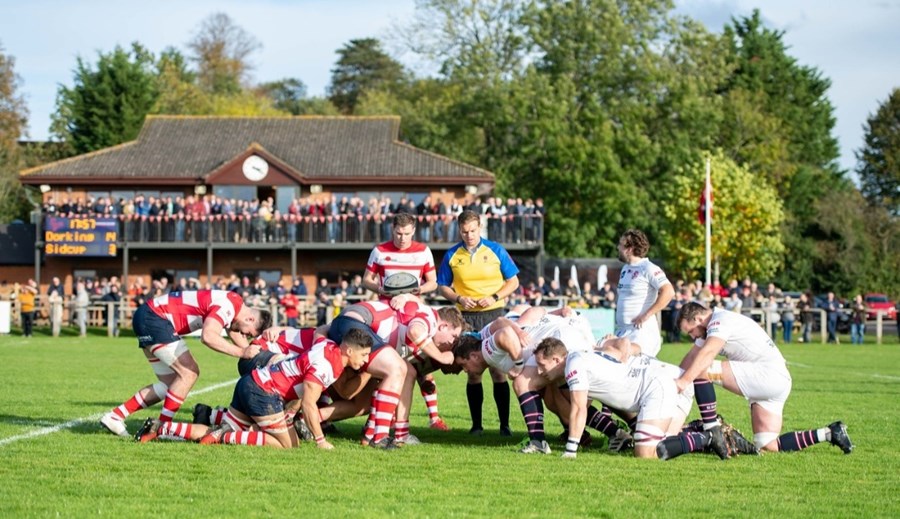 After an overnight deluge it was good to arrive at The Big Field to find the sun out and conditions, albeit a little breezy set fair for an afternoon of exciting rugby. Visitors Sidcup had been, like many of the Southeast London / Kent sides somewhat of a bogey team in past years and an in-form Dorking 15 were looking to put things right. And so it was to prove in an attritional match which saw the red & whites run out comfortable winners despite some strong competition, both fair and foul.

It wasn’t immediately apparent how the afternoon would pan out with Dorking making three rookie mistakes in as many minutes from the off; not straight at the line out and a couple of knock ons followed by an uncharacteristic missed penalty from sure shooter Noble. Capping this, a Dorking offside under their own posts gave Sidcup an easy penalty and a 0-3 lead with just seven minutes on the clock.

This seemed to wake the red & whites up and as Sidcup playing with the wind behind them hoofed the ball back into the Dorking half following the re-start. A stunning 50 / 22 kick (what a great new law) from full back Cam Cowell gave Dorking an attacking line out on the Sidcup 5m line which was cleanly caught and driven over the line, Joel Grant touching down for the first try of the afternoon. With the conversion kick from virtually the same spot as the earlier missed penalty, Matt Noble made no mistake. 7-3 to Dorking.

Flying winger Olly Rathbone was forced to leave the field in the 12th minute with a pulled hamstring, replaced by Jordan ‘Gamu’ Gomez making his debut in the 1’s. MC Mosley Senior on the mic reminded the Dorking faithful that the last time Gamu graced The Big Field he had scored a hat trick – against us!

As Sidcup regathered the ball, a speculative up field kick from the 10 fell straight into the arms of Captain Noble who slotted a low punt return for Fraser Mosley to chase. A kindly bounce, perfect catch and a mesmerising reverse inside pass put Cam Cowell in the clear to score under the posts. Try converted taking the score to 14-3, with former front row player Mosley Senior commenting ‘he gets it all from his dad you know’.

The match then settled into a more even pattern of possession, with Sidcup pressuring the Dorking defence and threatening to unleash what looked like quite a dangerous back line, if only they could keep possession. Holding firm, Dorking countered with strong defence and multiple phased attacks culminated in an attacking line out on the Sidcup 22, followed by an attacking scrum and a second try, this time out wide for Cam Cowell. A missed conversion kept the score to 19-3.

Sidcup rallied and several swift attacking phases of play and sleight of hand wrong footed the Dorking defence allowing the winger Patterson to walk in an unopposed try out wide. With the conversion missed the score was 19 – 8 with 32 minutes gone. It was to be the last time that Sidcup troubled the man with the scoreboard remote all afternoon.

Moving play back into the Sidcup half, an attacking line out on the 5m line saw a training ground move with Fred Dalton receiving the tapped ball to score unopposed. He had to work a little harder for his second, minutes later, breaking two tackles to touch down near the posts. With only the second of the Dalton tries converted, Sir blew for the half time oranges with the scoreboard reading Dorking 31- 8 Sidcup.

The second half saw a change of personnel in the Sidcup front row and a change of tactics as the game became bogged down in a series of niggling forward confrontations, culminating in a yellow card for the newly introduced Sidcup tight head and a red for Dorking’s Catton. With two of their front row now out of action, one injured and one carded, Sidcup were forced to ask for uncontested scrums which seemed to take the steam out of the game. Further injuries forced the red & whites down to 13 men on occasion and very much on the back foot repelling waves of Sidcup pick and drives. But fatigue was telling and even with the extra personnel Sidcup were unable to capitalise as a combination of tired hands and heavyDorking tackles caused knock ons with the try line seemingly beckoning on a number of occasions.

In the final twenty minutes it looked as if the game was destined to peter out at 31-8, but the fresh legs of Tyler Norwood and first team debutant Joss Hammond regalvanised the red & whites. Regrouping for the final 15 minutes, they crossed the whitewash for 3 more tries; a third for Fred Dalton following a chip and chase up field by Ryan Jeffery, a debut try for Jordan ‘Gamu’ Gomez collecting a perfectly weighted kick through the defence from Matt Noble, and an interception and try out wide by Matt Noble following sustained pressure on the Sidcup 22. With all 3 tries converted, it was Dorking 52 – 8 Sidcup at the final whistle.

“Really pleased with another good performance this week. We showed the ability to score from set piece, phase play and kick return which is always pleasing to see from a coach’s perspective. Unfortunately we picked up a couple niggles that we will look at this week, but nothing too serious. Looking ahead, we make our way down to Brighton next, and the players know that we are only as good as our last performance and we cannot allow any focus to drop from doing the job at hand”