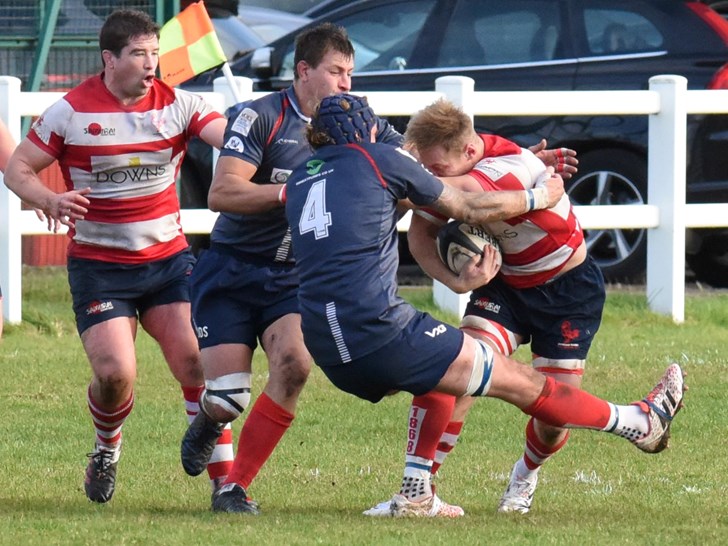 The 1st and 2nd XV’s were both away this weekend in a good old fashioned ‘double header’ at Brighton RFC, just like it used to be back in the day. A good sized Dorking crowd had made their way down to the South Downs where a swirling, gusting wind promised to make things difficult, especially for the wingers who had to contend with gale force 10 one minute and calm the next. And it was raining on and off.

The 2’s kicked off at 2pm and were soon into their stride with a brace of early tries, running out 0-45 winners with Sir calling time some 10 mins early. Just as well as it turned out….

At 2.30 prompt the game got under way, and it was soon obvious that the wind would play its part as the Brighton forwards chased down a long kick, its trajectory misinterpreted by the entire Dorking pack. But the attempted catch was adjudged to be a knock on and the two sets of forwards bedded down for what was to be the first of many set piece scrums. The Red & Whites were soon into their stride with an attacking line out on the Brighton 22, a catch and drive, quick hands and Fraser Macdonald was over in the corner, clubhouse side. Gauging the wind perfectly, Matt Noble neatly bisected the posts with his first conversion of the day. 0-7. The re start fell neatly to hand, and a wind assisted 50/22 kick from maestro Cowell had Dorking on the attack again, a second try denied only by a wind assisted forward pass. The majority possession was with the Red & Whites, but try as they might ,they couldn’t quite get momentum going, with Sir frequently penalising them at the break down for a slow release of the ball.

Using the wind, Brighton kicked a penalty long to the left-hand corner. Stealing the line out, Dorking moved play back up field and Fin Osborne was just held up over the line. This season it’s a defending side drop out rather than an attacking side scrum, and the ball was quickly regathered by Fin and shipped wide out to Fraser Mosley to score, Conversion again good, 0-14.

Dorking then seemed to get on the wrong side of the referee, and a number of penalties and knock ons allowed Brighton back into the game; a break down the centre of the pitch by the no 7 ended with an unconverted try from the unopposed winger. 5-14. The remainder of the first half was played out frustratingly in what can only be described as driving mizzle, ending a few minutes early following ruck from which the Brighton 4 didn’t get up, having been knocked out cold. (The news in the bar post match was that he was ok, but taken off to hospital for tests to make sure – we wish him a speedy recovery)

The delayed second half was moved to the 2nd team pitch, the game there having finished early. Being more exposed, the wind was constant but less gusting, and this seemed to allow both teams to play with a greater fluidity. Opting for a scum instead of a penalty in front of the posts, Dorking fumbled the wet ball (it had started raining again) and Brighton cleared their lines, but only as far as the 22 where they gave away a penalty. A quick tap and go from Jasper King was hauled up just short of the line, but Prop Charlie Connor was there in support to finish things off. A difficult conversion into the wind and sun by Matt Noble took the score to 5-21.

Regaining possession from the re-start kick, a well-judged 50 / 22 kick from scrum half Henry Smith gave an attacking line out just short of the Brighton 22, from where the ball was whipped out wide to Fraser Mosley, in for his second of the day. A difficult conversion, again into the sun, wind & rain, missed, 5-26.

Some foul play unseen by your scribe, but not by Sir saw a red card for one of the Brighton back row followed shortly by a yellow for Dorking’s Ryan Jeffery for a deliberate knock on. With Coach Roux emptying the bench, Jonny Aiken, Daragh Chambers and Callum Watson were soon making their presence felt with multiple phases of play and making good yardage, culminating in a converted try under the posts for Henry Smith. 5-33

From then on it was all Dorking, as superior fitness, skills and the extra man began to tell. Sharp interplay between Callum Watson and Jonny Aiken put Jordan ‘Gamu’ Gomez over in the right hand corner for another converted try, and Captain Noble iced the cake with a try under the posts following a turnover ball and popped pass from Callum Watson. An easy conversion followed by Sir’s full-time whistle saw the final score at Brighton 5-47 Dorking.

Dor Roux commented:
"It was not a perfect performance but we managed to get the job done by showing some cracking resilience.

Weather conditions were not great and same further disruption with the moving of pitches was not ideal. Scoring 33 unanswered points in the second half in brutal fashion just showed how effective we can be.