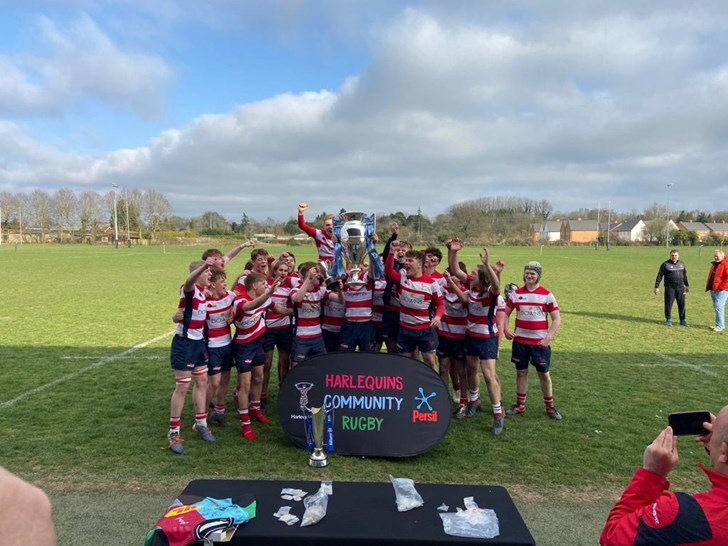 On Sunday Dorking Colts returned to Farnham for Quins Cup Finals Day. Having convincingly won their Waterfall Cup competition before Christmas, Dorking were promoted to the premier competition comprising of the 8 best teams in the county. Dorking had a tough qualifying group with both Farnham (overall winners) and Wimbledonians (runners up) in their half of the competition.

The earlier results meant that Dorking travelled to Farnham to face a Richmond side who they had beaten earlier in the competition, but in very different conditions. There was no complacency among the Dorking ranks, which was just as well as Richmond turned up with a much stronger side than in the group fixture.

Dorking were in good spirits themselves, having beaten Horsham the week before with a much smaller squad. With players returning from injury, Dorking had a full squad of 23, and were seeking their second piece of silverware this season.

Dorking began the game with real intent, putting some great phases of play together, with backs and forwards interlinking. Flanker Henry Page was usually at the centre of these, carrying hard and offloading out of tackles. The forwards were good in the set piece too, with the Dorking scrum dominating and the lineout showing the benefits of some really hard work by the boys on the training field in recent weeks.

But despite the early pressure, Dorking couldn't turn this into points. A couple of opportunities on the Richmond line were spurned, with Callum knocking on just short of the line. Another was chalked off by the referee as skipper Michael Dees powered over from a quick tap penalty and appeared to touch down at the base of the post, but to no avail.

Dorking then seemed to switch off for the rest of the first half, giving away a string of penalties at the breakdown to allow Richmond to advance up the pitch. One of these, just before half time, allowed Richmond a shot at goal from in front of the sticks and to go into the break, 3-0 up. Competition rules meant that whoever scored first would win the cup in the event of a draw so this could have been crucial.

The boys knew at half time that they should have been at least two scores up and were determined to put things right.

The start of the second half followed a similar pattern to the first. Dorking began strongly but then slipped back into giving away some soft penalties. From one of these, a quick tap allowed the big Richmond No.8, who was their best player, to break a couple of tackles and score under the posts. 10-0 to Richmond.

The one thing we have learnt about this Dorking Colts side is that they do not give up. The boys tightened things up, cut out the 50/50 offloads and began to power their way back up the field. Despite numerous changes in the front row, Dorking were still dominating the scrums., earning another penalty in the Richmond half, which Oliver Shepperd kicked to the corner. Dorking caught the lineout cleanly, set themselves up for the drive and then powered over the Richmond line. Hooker Ollie Rawlinson in the driving seat, finished off a great forwards' try. Callum then slotted a great conversion from wide on the right. 10-7 and game on.

The game then fluctuated, going from end to end at times. Dorking were camped in their own half and had to resort to running the ball out from behind their own posts. But the boys remained patient. Richmond were now under pressure and started to give away penalties. Dorking eventually worked their way into the Richmond 22. After a couple of line breaks, and with only 4 minutes left on the clock, centre Jack Benham broke a couple of tackles, reached out for the line to touch down. While Dorking celebrated, the referee signalled for a knock on.

With only a couple of minutes left now, Richmond faced a scrum on their own 5 metre line. The Dorking pack knew this was their last opportunity and powered the Richmond 8 back towards their own line. Scrum-half Craig was all over his opposite number who fumbled the ball under pressure behind a retreating pack. Craig had the presence of mind to dot the ball down on the line to score. With another difficult conversion missed, Dorking led for the first time in the game, 12-10.

Yet again the boys had battled back against the odds and despite having two tries disallowed (a recurring theme for this season) showed amazing resolve to come back and win the competition. Another trophy for the cabinet and also a chance to lift the Premiership Trophy that Quins had brought with them for the day. It was difficult to single boys out after another full squad performance, with all 23 players contributing again, but Henry was awarded the trophy for player of the match and Callum for player of the tournament.

This Colts team has progressed so much this season and its thanks to the Colts Coaching team of Dom Brockes, Gareth King and Dom Smales that has developed and supported this age group.

It was also the first season of our Colts Development Program where coaches like Cam Cowell, Tom Bristow, Henry Birch, Armand Roux, Dan Mackenzie and Benji Wroblewski all contributed towards developing the players both inside and outside of playing Colts Rugby. 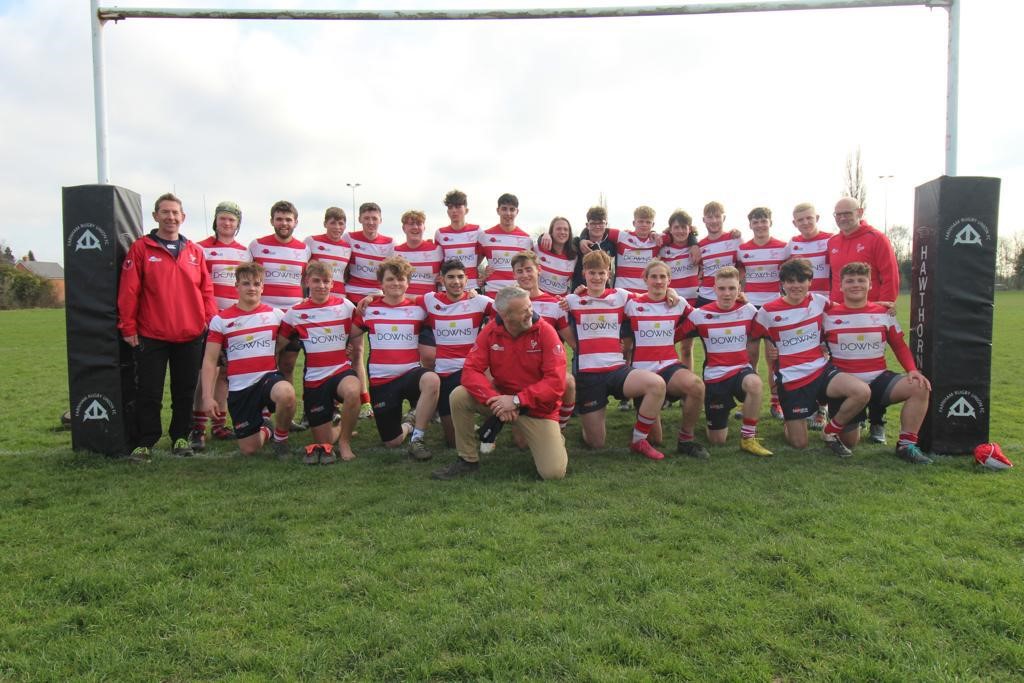