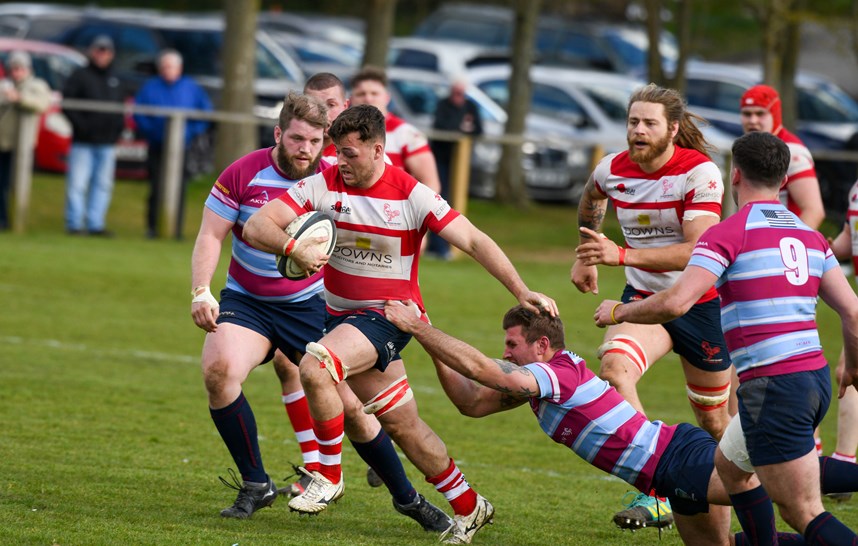 Along with the Dorking Faithful, clear skies, a lush green pitch and a biting North Westerly wind welcomed Wimbledon to The Big Field for what had become a ‘must win’ game if the Red & Whites were to keep their promotion hopes on track following two losses on the bounce. The game back in December had been played under leaden skies on a sodden pitch and Dorking were fortunate to steal a last minute 24-25 win so this, combined with the need for a win today meant there was a palpable frisson in the air as Captain Noble led the team out for the final time in his 16 years of playing first team rugby.

Dorking kicked off playing downhill and for the first 8 minutes the two sides probed each other’s defences with a selection of pick and drives, backline moves and aerial ping-pong about the mid field, all met with resolute defence. The deadlock was broken with a clean catch and drive from a line out following a penalty on the Wimbledon 22 which saw James Catton shunted over the line for the first score of the afternoon, duly converted by Matt Noble. 7-0.

Another 10 minutes of midfield nip and tuck, albeit played at breakneck speed saw no score from either side, although the pace of the game was beginning to take its toll on the Wimbledon pack, rumoured to contain five front row players. With trademark drives from no. 8 Finn Osborne, Will Galbraith and Daragh Chambers, Dorking took play back into the Wimbledon 22 where sustained forward pressure and sleight of hand from the backs saw lock Joe Spurgeon crash through the final defensive tackles to dab down under the posts and a second conversion for Captain Noble. 14 – 0.

Further pressure turned to points as a strong driving maul resulted in a second try for hooker Catton and a third conversion for Captain Noble, who had clearly packed his best kicking boots for his final game. 21-0

It was then the turn of Wimbledon’s Jake Noble (no relation) to get his name on the score card as the Wimbledon back line caught the Dorking defence napping in celebratory mode, with a well worked try under the posts which, not to be outdone by his namesake he duly converted. 21-7

A spot of advice from the coaches delivered as the Red & Whites awaited the conversion was clearly heeded, and from that moment on the game turned very much in Dorking’s favour as their forwards began to dominate in both the set piece and the loose and their backs began to create space and find holes in the Wimbledon back line. On the stroke of half time, wing cum centre Fraser Mosley was over in the far-right hand corner and Captain Noble added the extras with his best kick of the day so far. Bonus point in the bag, 28-7 and cue the half time oranges.

Dorking started the second half as they had finished the first. Working the ball up field, a 40 metre break by Finn Osborne took play almost to the try line. With Wimbledon turning the ball over in the resulting ruck, a counter-attack looked on the cards, however the pass across the face of the posts was telegraphed and Dorking centre Fraser Macdonald plucked the ball from the air to dab down left of the posts for Dorking’s 5th try, duly converted by Matt. 35-7

The score line encouraged more expansive play from the Red & Whites, and a tiring Wimbledon side were soon back on the defensive as forwards Will Galbraith, Fred Dalton, Finn Osborne and Daragh Chambers made a succession of probing runs over the gain line giving scrum half George Jackson the proverbial armchair ride. This, combined with the front row trio of Bristow, Catton and Birch along with lock Joe Spurgeon popping up in support meant that the Dorking half was something of a ‘no go’ zone for the second half, with play mostly in the Wimbledon 22. However despite the pressure, the Wimbledon defensive line held firm and there was to be no further score until the final quarter of the match.

On the 60 minute mark Coach Roux emptied the bench with Barney Davies, Cam Osborne and Max Sheldrake coming on for Fraser Macdonald, Cam Pimlow and Joe Spurgeon respectively, with prop Henry Birch moving to the second row. A yellow card for Fraser Mosely for a deliberate knock on (it was an attempted intercept he claimed afterwards in the bar) saw Dorking reduced to 14 men but this didn’t affect the run of play and two further scores from Will Galbraith and Finn Osborne, both converted took the score to 49-7 in his absence.

Restored to 15 men, there was still time for one further try, with winger Louis Flynn going over in the top right-hand corner. 54-7. And time for Captain Noble to sign off in style with the conversion from the touchline, into the wind neatly bisecting the uprights. 56-7.

A solitary foray into the Dorking half by Wimbledon in the dying minutes of the game was quickly snuffed out and as Dorking knocked the ball on in the turnover, Sir blew for the end of the match. Final score Dorking 56-7 Wimbledon.

A week off for Easter, then it’s on to the final match of the season on Saturday 23rd April, away at Tunbridge Wells. Your support will be needed to cheer the lads over the line.

Really pleased that we bounced back in style which is a really good relection of this special group of players who has the ability to put aside the 1 score dissapointments of the last 2 weeks and show some guts to get back on track.

Forwards was outstnading and the backs were very good at looking after the ball and putting us in the right areas to play rugby.

Special mention to captain fantastic, Matt Noble, who had a epic last 1st team game alongside a 100% kicking record from some really tough angles. He will no doubt be supporting the boys going forward as he spends some more time with his family.