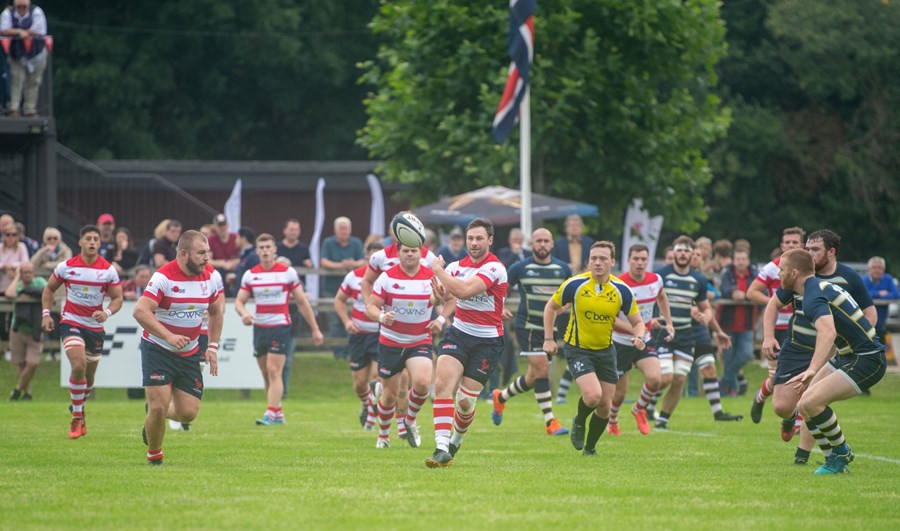 After an 18-month layoff there was a palpable air of anticipation at the Big Field as the 3pm kick of time approached. With a good number of Tunbridge Wells supporters and youth contingent making the trip along with the massed hordes of the ‘Dorking Faithful’ the paddock was full, the new balcony heaving and the touchlines rammed. It was good to be back. Perversely it seemed both a long time ago, and at the same time like only yesterday that it was ‘match day’.

The first match of DRFC’s Centenary season, prefaced by some fine skills from both DRFC and TW youth teams and a minute’s silence in remembrance of club members lost since we last met saw the red & whites out of the traps quickly, and after laying down a marker in the first scrum the ball was spun out wide to the right and taken into touch by TW. A catch and drive from the ensuing line out saw the ball brought back to the left and a fine long pass by Cam Cowell put Toby McRae in the clear and under the posts for the first try of the afternoon. Captain Matt Noble added the extras, and it was Dorking 7 – 0 Tunbridge Wells with less than 5 minutes on the clock.

As is so often the case following a score, a transgression at the re-start gifted a penalty and 3 points to TW, and Dorking found themselves re-starting the game with their lead cut to 4. Some midfield exchanges saw Dorking regather the ball and a fine chip through the TW defensive line from Captain Noble saw no.8 Finn Osborne winning the footrace to collect the ball and dot down to the left of the posts for Dorking’s second try, again converted, taking the score to Dorking 14 – 3 TW.

Collecting the ball cleanly at the re-start, Dorking worked the ball downfield where a spilled ball gave TW a scrum put in on their 5 metre line. More fine work by the Dorking pack turned the ball over and two long passes to the left saw Toby McRae receive the ball with nothing but the try line ahead of him. Try, converted by Matt Noble, who had clearly looked after his kicking boots during the layoff. Dorking 21 – 3 TW.

Sensing that they were in trouble, the TW backs, who had looked dangerous with what little ball they had had thus far, started to spin the ball out wide, and taking the play up field pressed the Dorking defence hard. Aided by some hard charging by the no 8, they worked the ball out to the left and were rewarded with a try, the conversion slipping just wide. Dorking 21- 8 TW. Collecting the ball from the re-start, TW kept up the pressure on the Dorking line, and a period of sustained possession and pressure was rewarded with another penalty on the stroke of half time. Dorking 21 – 11 TW.

With TW having had the better of the final 10 of the first half and now playing down the slope their touchline support was abuzz with how their back line would take advantage. Dorking however had not read that particular script and promptly took play back into the TW 22. A couple of quick ruck balls and a planned move off the back of the scrum saw Dorking lock Jasper King was in clear space and under the posts for try number 4 only to be called back by Sir, who promptly apologised for getting in the way of play and awarded a scrum, Dorking put in. Driving upfield the ball was knocked on with the line beckoning, and TW had the put in at a scrum some 5m from their line. Again the Dorking pack took control, and shunted the TW pack backwards over the tryline, allowing James Catton to flop down on the ball for Dorking’s 4th and bonus point try. With the conversion missed, the score moved to Dorking 26 – 11 TW.

The next 10 minutes saw play in the Dorking half as TW, led by their no 8 sought to save the game. Stout Dorking defence prevailed, and a desperate TW pass out wide on the right was intercepted by winger Toby McRae, who sprinted 70 metres unopposed to touch down under the posts for his hat trick, duly converted by Matt Noble. Dorking 33- 11 TW with some 15 minutes to go.

And despite concerted TW pressure and two Dorking yellow cards, one for each flanker, leaving them with only 13 on the pitch, that’s how the score remained.

“Overall, I was pleased with the result today, but we know we should have done a few things a little better. Our penalty count was not acceptable, and we got a little complacent with our lead. There are however lots of positives to take from today, and our work rate in contact was exceptional. First league game in a long time, and if you take this into consideration alongside a few new faces, then the win was a good one to build on”.