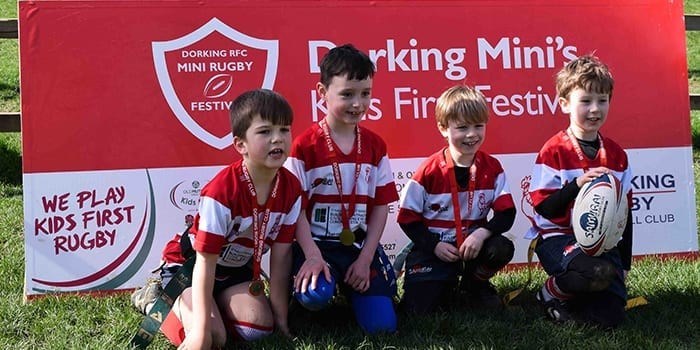 If you were in the Brockham/Dorking/Betchworth area on Sunday, you couldn’t fail to have noticed the throngs of people flooding into Dorking Rugby Club. A massive 2,500 children (plus parents, grandparents, siblings etc.) from 26 clubs came together bringing over 250 teams to the Big Field to play some 500 games, have loads of fun, and eat their own body weight in burgers, ice-cream and sweets! Our visitors came from far and wide including Edinburgh and Jersey making it an international event!

The weather was kind to us and made for a perfect day for the children to enjoy their Rugby. Dorking Kids First festival is for U7s – U11s boys and girls playing together and takes its ethos from the RFU’s drive to up-skill coaches and create a great rugby environment so that everyone stays in the game for longer. All teams play four competitive games with no knock-out and every player gets equal game time. With ice-cream covered smiles on the faces of thousands of children taking part, this is the way youth rugby should be played and Dorking will continue to promote this at the club and at future festivals.

One visiting team commented “We’ve never been to a festival this big. It’s so well organised, I can see why people come back year after year.”

Leo Kane, DRFC Youth Chair comments “I have been involved with Dorking RFC since my own mini days and as a player in some of the very first Dorking Festivals nearly 40 years ago. Rugby has developed and moved on, focusing on the players development and enjoyment throughout their youth career. Let’s give our players the chance to explore and grow at their own pace. We’re very proud that some of Dorking’s former youth players have gone on to play at International level. Rugby is a game for all, and our job is to make all of them the best they can be. Kids First Rugby is backing this ethos and Dorking RFC is very pleased to have taken this pledge and put it into action. We look forward to welcoming our guests again next year, for what is probably the biggest youth rugby festival in the country.”

It was another fantastic festival made possible by all of the volunteers, both on the day and at the ‘work party’ day on Saturday. These things don’t happen by chance and there are just so many people to thank. We’ll be running a special feature to give a full rundown of the day soon, so until then, where we’ll truly showcase our fantastic support crew, let’s say a special mention to the volunteers on the two BBQs all day including Sarah, Pip, Jinny, Jane and a budding junior master chef Zander, and so many of our senior players; our central and age group controllers, referees, coaches and touchline judges – many of whom were parents, Nicky and the fantastic pint-pullers, the huge number of car park volunteers who raised over £800 for the JDYDF, John Watkins who walked MILES getting some fantastic photos (coming soon), everyone who helped set up on Saturday; everyone who stayed behind after for the big clear up.

Of course, we’re bound to have missed someone on this, but you can start to really appreciate the scale of support that we received for this epic event! This simply wouldn’t have happened without volunteer support. If you helped, then to you we say “Thank you and WACOMB!” There were so many comments about how well we do as a club and how much the players enjoyed themselves – people even took to Twitter with their comments!