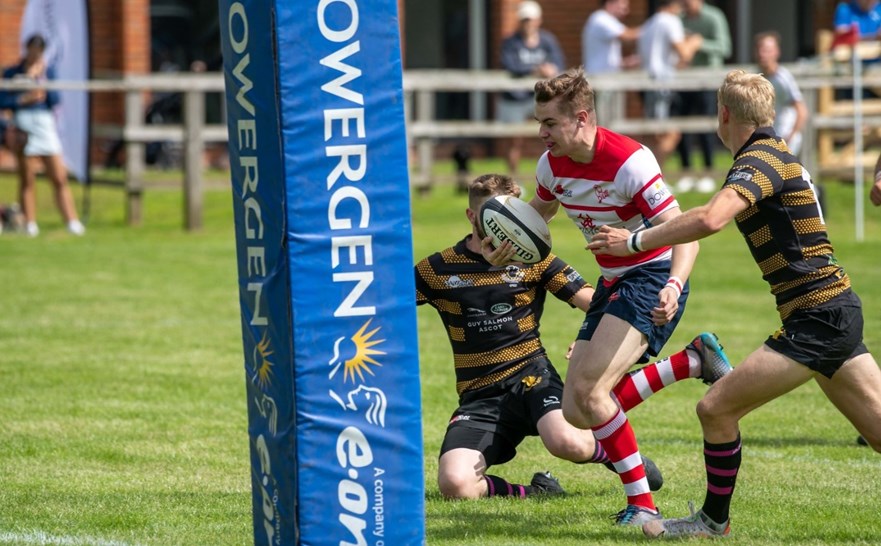 On Saturday 14th August, the sun rose like any other day. However, this was not just any other day. For the first time in what seems like an eternity, full contact, unabridged, unbridled rugby returned to The Big Field. Brockham was abuzz with palpable excitement as the Dorking A team had the honour of providing a curtain-raiser to the day against Camberley.

The team was a great blend of some of the usual faces, older heads and exciting injection of youth scattered through the side. It was an electric start from Dorking as well as they managed to navigate their way into the Camberley 22 helped by the laser guided boot of Killian Wilson who returned to the 2’s after his stellar season for the 1st team the last time rugby was played, pre-pandemic. Camberley tried to play expansively from deep and the Dorking defence that was such a staple of the side before suffocated them into making a mistake. This ended up with a Dorking lineout just inside the 22-metre line and a well organised maul trundled their way over the try-line with Captain Jake Dobson opening his account for the year.

Someone who will be expecting to spend a bit more time dotting the ball down is the exciting colt graduate, Will King. Following a searing break down the middle of the park by someone at the other end of his Dorking journey, Mike Terelak, having been tipped through a gap by the outstanding Tom Dobson got Dorking back in Camberley’s territory. A lovely flowing back’s move ended with the aforementioned Will King dotting down in the far left corner for the first of what I am sure will be many scores for the young man.

Dorking’s discipline started to be pulled into question as the half went on and fatigue started setting in but they were resolute and managed to hold their try-line unbreeched to go into halftime 14-0 to the good. A swathe of changes to go into the second half ended up costing Dorking the result as they struggled for continuity and discipline meant they were pinned in their own 22 for most of the second half, only really interrupted by a searing break off his famous right foot step by Tommy Hunter to give Dorking a lead again after Camberley had crawled their way back to parity but they were unable to keep them out for good, eventually going down 21-28.

It was a great showing with the team getting invaluable miles in their legs, some outstanding glimpses of what promises to be an imposing side when it comes to league games. Killian kicked with aplomb, nailing conversions from all corners for a 100% day off the tee. Joe Scott and George Spreckley caused all sorts of problems at scrum-time. Alongside his try, Jake Dobson was imperious in both the loose and disruptive at lineout time to cap an awesome captain’s display. Finally, it was great to see some men’s debuts for the likes of Will Goudie who looked to the manor born coming on at hooker, Dougal Gray, Jack Parkinson, James Kinnell, Mike, and Will King who went on to back up for the 1st team and did not look out of place. At the end of the day, rugby was the real winner! Can’t wait to see everyone back next Saturday as the preseason continues against Rochford Hundred.